Jeb Handwerger, analyst and founder of Gold Stock Trades, told Uranium Investing News that he believes “we are very close to the bottom in spot prices. The market is beginning to realize that nuclear power has a future in the world’s energy mix.”

He noted that the crisis in Fukushima was the result of a natural disaster — a magnitude-9 earthquake that resulted in a cataclysmic tsunami — not a nuclear accident. That same earthquake caused a hydroelectric dam in the Fukushima district to collapse, destroying thousands of homes and killing hundreds of people; yet there was no huge public outcry against the use of hydroelectric power.

Today, governments around the world are looking to increase energy production from reliable sources while reducing their carbon footprint. Most understand that nuclear power is a crucial part of the solution to rising energy demand. “It’s not feasible to turn away from nuclear power without grave economical costs to a modern industrial nation,” explained Handwerger. “It’s ridiculous to bet your energy future on one solution, like solar or coal or natural gas.”

Countries are building nuclear reactors. Sadowski pointed out in his interview with The Energy Report that “there are nine more reactors in the planned and proposed category today than there were before [Fukushima].”

Nuclear power reactors are under construction not only in energy-hungry nations like China and India, but also in oil-rich Saudia Arabia and the United Arab Emirates. “What this means to me is that even the countries with tons of oil know nuclear is the future. The 21st century is going to be nuclear,” said Jeb Handwerger.

It’s not just governments. According to Handwerger, “big money is also realizing where the future of energy is going.” For example, Shaw Group (NYSE:SHAW), which is building four reactors in Georgia and South Carolina, was recently taken over by Chicago Bridge & Iron (NYSE:CBI) for $3 billion because of its position in the nuclear industry. The new company, CB&I Shaw, will have a hand in building nuclear power plants, gas-processing plants and oil storage tanks.

Another great example, according to Handwerger, is Bill Gates’ position as one of the primary investors in TerraPower, a nuclear reactor design company. “Gates has invested tens of millions of dollars. To me, that’s a testament that forward-looking people know that when it comes to power, you need a mix. And that mix has to include nuclear,” he said.

All this nuclear development will require more uranium than above-ground supplies can provide, creating opportunity for uranium miners and the investors who believe in them.

“We’re seeing countries around the world building reactors. So we can expect to see more utilities signing long-term supply deals like the one Paladin just signed,” noted Handwerger. Paladin Energy (TSX:PDN,ASX:PDN) recently hooked a six-year supply deal under which an unidentified utility will give the Australia-based miner an upfront payment of $200 million for 13.73 million pounds of U308. Payment will be made in 2013, but Paladin does not have to start delivering until 2019. Handwerger calls the deal “a significant development that tells me utilities are in disparate need of uranium.”

Subscribe to my premium service to follow some uranium miners which may be on the verge of major gains by clicking here... 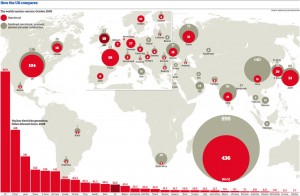