This Rare Earth Junior Is Beginning To Outperform 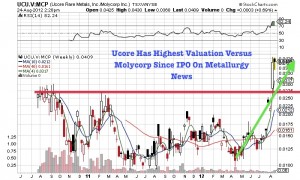 Look at the outperformance of Ucore (UCU.V or UURAF), a U.S. heavy rare earth developer versus Molycorp (MCP) who controls Mountain Pass, a predominately light rare earth deposit.  Ucore is at its highest valuation versus Molycorp since the company went public in July of 2010.

Ucore Rare Metals (UCU.V or UURAF) has the only NI43-101 compliant heavy rare earth asset right here on U.S. soil. Instead of looking to far off places for refinement and separation of the rare earths like Lynas (LYSCF) and Molycorp, Ucore is the only heavy rare earth company working on cutting edge and pioneering Solid Phase Extraction (SPE).

SPE is a process similar to a spider web which captures the desired elements through the use of polymers.

Ucore has hired a PhD Chemist Dr. Rich Hammen who has pioneered this metallurgical technology in the pharmaceutical industry and at NASA. Ucore and Dr. Hammen believe there is great potential for this to be used in the rare earth mining industry and especially on Bokan ore.

Ucore is the first and only rare earth company using this technology and may be on the verge of separating the individual rare earth oxides. This would be truly a historic moment as it would be the first time dysprosium is produced on American soil. It would mark U.S. rare earth independence.

Disclosure: Long UCU.V and Ucore is a featured company.