There is an economic malaise all over the world, record unemployment and soaring deficits, yet the general markets are hitting new highs.  How can a market rise despite all the negative gloom and doom economic numbers?

We believe the market and intelligent capital is coming to the realization that the Central Banks through the use of Quantitative Easing and record negative interest rates may start a stagflation which is when commodity prices rise higher in the midst of poor economic conditions.  This occurred in the Ford and Carter administration when gold, silver and mining stocks soared.

Yields are beginning to rise rapidly since we called the top on treasuries on 7-25-12.

Supply shocks accelerate stagflation and we may be witnessing that with the crop shortage due to an historic drought that is causing food prices to spiral higher.  We may also witness an oil shock with the growing tensions in the Middle East especially between Iran, Syria and Israel.

Precious metals, gold miners and the uranium miners are beginning to show strength and the early stage junior miners may continue to outperform moving higher outperforming gold bullion as a hedge against declining fiat currencies.

We are in the summer goldrums (©Gold Stock Trades) which is characteristically low volume and when many resource investors especially in Canada are enjoying the great outdoors rather than their computer screens.  Investors are waiting for the Federal Reserve Jackson Hole meeting at the end of August.  We may see an explosive move in our sectors after Labor Day, although there appears to be buying in anticipation of investors returning to the market.  Silver and gold are making constructive flat bases, bollinger bands are converging which is indicative of a breakout which we believe is to the upside. 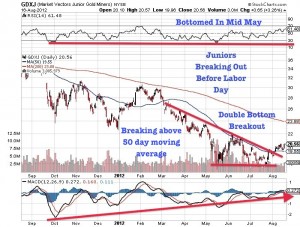