We do not equivocate or hedge or straddle ambiguous opinions.  We try to deal in straight talk.  Time and time again we have been a rare voice calling for a better than expected rally in wealth in the earth mining assets, gold, silver, uranium, rare earths and graphite.

Well here we are with the weekend Greece election which could depending on the outcome cause a pandemic meltdown for the global economy.  Already Greece is in crisis, hospitals are out of  basic necessities, people are rioting in the streets and jumping out of buildings.  Unemployment is above 22%.

The case for the Federal Reserve announcing accommodative measures is exponentially growing as the U.S. dollar has strengthened and commodities have declined since the expiration of QE2 last summer in 2011.  The Fed meets Tuesday and Wednesday of next week and may use this meeting to promote a “risk on” rally, especially if the European uncertainty spreads to the U.S. financial system.

Do not forget MF Global and JP Morgan lost billions of dollars investing in sovereign debt.  We predict more banks may face significant losses especially if we see a decline in bond prices or the U.S. dollar which is quite an overbought and crowded trade.

First let’s look at the source of a potential rally.  A possible announcement by the European Central Bank (ECB) acting in concert with the Federal Reserve could unleash a counter attack catching the naysayers and hedgemeisters frozen in their shorts.

We wrote, “In the midst of such a sepulcher market, we sense that a relief rally may descend unexpectedly and equally precipitously as the decline through which we are going, will be the rise.  Note that the relief rally will come as surely as the sun breaks through the clouds of doom and gloom.”

In one fell swoop a massive injection of liquidity could be administered worldwide.  Victoria’s messenger could come galloping on the scene just in time at a propitious moment.  Do not be surprised to see increased volatility to the upside as there are a record number of investors and funds in the U.S. dollar and Treasuries.  Where will these speculators go if the Fed makes a move to punish the hoarders of U.S. dollars and treasuries?

This liquidity stimulates inflation which encourages a rise in the prices of our select natural resource equities.  Certainly the naysayers will rush to cover and those “experts” who only recently were calling for the death of commodities will join the risk on camp in panic mode and fail to be positioned for a potential powerful upmove.

The action by the Fed and the ECB will not be the last move in this quest for global liquidity.  It comes as no surprise to my readers that QE3 or Operation Twist 2 waits in the wings.  Additionally, as part of this one-two blow, The Feds may extend record low interest rates to 2016 to send the “shorters” down to the canvas once again.    Watch gold and silver as the little guy in Europe is grabbing a handful of gold and “poor man’s gold” to escape the Euro.  Do not be caught up with the masses when it occurs in the United States.  In the sector we must think two steps ahead before the hard rain falls. 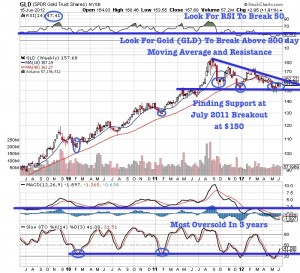 Gold has broken above the 50 day moving average after falling to long term support and making a double bottom.  A break of the triangle to the upside could indicate an explosive rally to possibly break through $2000.  The gold miners ETF (GDX) has also regained the all important 50 day moving average.

Recent price action vindicates our repeated entreaties to keep your hand firmly on our selected “wealth in the earth” resources and precious metals.  Patience and fortitude is still valid and will pay off.

Sign up for my premium service for free by clicking here...