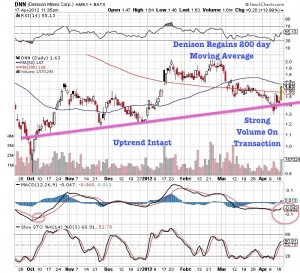 Today an important news item comes across the wires which is related to one of our select companies Denison Mines.  Energy Fuels and Denison Mines Corp.  today announced that they have entered into an Agreement to complete a transaction which will create the largest 100% U.S. Pure-Play Uranium Producers.

For several months we have been alerting our readers to an increase in M&A activity especially in the undervalued U.S. uranium miners.  This new entity will hold one of the largest NI 43-100 compliant U.S. resources of close to 50 million lbs. of measured and indicated uranium.

Our readers are well aware of the already growing deficit in uranium ore in the United States.  If it was not for the Russian "Megatons to Megawatts" program which converted nuclear bombs into nuclear fuel, the United States would already be in shortfall.  This program may be terminated in 2013, causing a major supply shortfall.

We are seeing greater interest from the big boys to secure U.S. domestic uranium production.   One must remember that the U.S. consumes 55 million lbs of uranium, whereby only 4 million lbs is supplied by domestic production.  We believe this will be just the beginning of further consolidation of U.S. uranium near term producers.  This transaction may be momentous for the entire sector and may be just the beginning for future M&A activity.

Steve Antony, President and CEO of Energy Fuels commented, "This transaction is transformational for Energy Fuels and reshapes the landscape of the uranium sector within the U.S. It combines the highly strategic asset of the only operating uranium mill in the U.S., White Mesa, with a significant resource base that substantially increases White Mesa's available feedstock. The result is an unmatched production growth profile and the opportunity for both Energy Fuels and Denison shareholders to benefit from the clear operational synergies that result from this transaction. I look forward to working with Denison's U.S. team to maximize the benefits of this important combination."

Ron Hochstein, President and CEO of Denison added, "This transaction is an important step forward for Denison. The Company has evolved on two parallel but different tracks, being both an exploration and development entity with a global footprint and an established producer in the United States. We are pleased to have the opportunity to combine our U.S. operations with such a complimentary set of assets and people. I'm excited about the opportunities that lie ahead for both Denison and Energy Fuels shareholders and believe that this transaction only serves to strengthen the operations of both companies."

Our  main recommendation over the past few months has been Uranerz Energy Corp and I still believe it may be the next major takeout target for either Denison, Cameco or Uranium One.  It hit a low in October; it has rallied since that point over a 200% move and has recently pulled back. I still don't think it's been recognized that it is in construction at its Nichols Ranch Project and should be producing 600-800 thousand pounds of uranium annually.

Its grades are substantially higher than its near term producing peers and it already has a processing agreement signed with its neighbor, Cameco. I think we're still early stage.

Uranerz is well funded and fully permitted for construction on its Nichols Ranch Project in the Powder River Basin, which is scheduled for production of uranium ore by the end of this year.

It is important to note that Uranerz' land position is strategically surrounded by hungry majors such as Uranium One and Cameco, which has stated that its production needs are beefing up. . .Cameco was willing to pay a premium for Hathor, which had nowhere near Uranerz' immediate potential. It may be occurring to Cameco that Uranerz might make a desirable acquisition that will enable the company to expand profitably in domestic U.S. uranium production.