We are currently witnessing a short term weak market in the large gold producers and precious metals as investors flock to overbought equities.

The long term trend remains up in gold/silver and we may be approaching a turning point
sooner rather than later. The equity markets are overbought while precious
metals are once again on sale at a discount.

One of our miners Corvus Gold (KOR.TO or CORVF:OTC) has been outperforming in a weak general gold mining equity market. 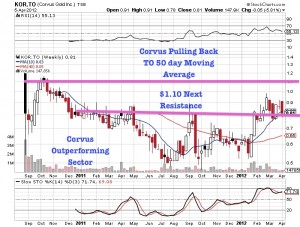 This could be the result of fundamental strength after they released impressive high
grade results from their North Bullfrog Property. 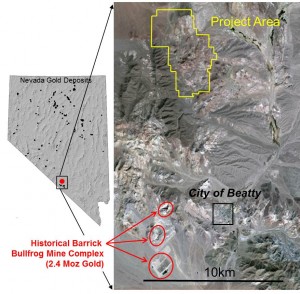 On January 25, 2012, I wrote in a premium update, "Subscribers will be
apprised on Corvus’ ongoing resource expansion and their high grade
drilling program, which could dramatically move this companies price
higher. High grade results in 2011 are encouraging and the company is
dedicated to following up in 2012 on these results." 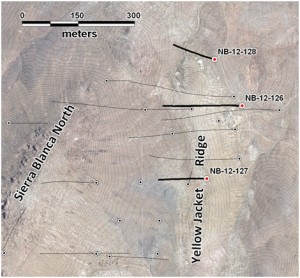 This is the first time the company has documented this high grade mineralization.  The company is very excited about additional targets on the property as well.  The company will probably do an updated resource in 2012 to factor in these results.  The company will be working on a feasibility study for near term production out of North Bullfrog and have brought on an experienced mining engineer to help lead near term mine development and design.

These high grade results come from an area 400 metres to the northeast of the proposed
Sierra Blanca pit and resource. In addition to yesterday's results, Corvus
is continuing to find success with their step out drilling program after completing an attractive PEA with a payback at $1700 gold of only 1.2 years.

What does this mean for Gold Stock Trades subscribers? Corvus is making great
progress expanding the size and the grade of this resource located just 90
minutes outside of Las Vegas.

It should be noted that this junior miner has one of the best management
teams in the business combining exploration geology expertise with mining
engineering know how. For a small cap junior miner it is rare to have such
managerial experience combining decades of experience in exploration geology and mining engineering . Financial support from such a major player as John Hathaway from the Tocqueville Gold Fund, Anglogold Ashanti amongst others indicates that Corvus is attracting the smart money.  In fact over 40% of the company is controlled by institutions and insiders. 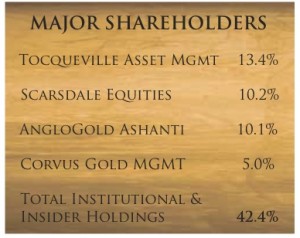 Jeff Pontius, CEO and Founder of Corvus Gold, took a few minutes to
discuss the recent discovery at North Bullfrog and the significance of this
news going forward as they move the project into feasibility.

Watch the interview with Jeff Pontius below discussing the recent high grade discovery. 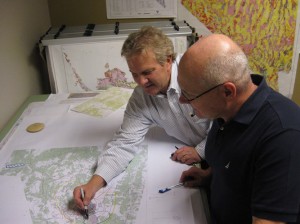 It should be noted Jeff has over 30 years of geological experience and
possesses a distinguished track record of successful discovery that
includes four precious metal deposits in North America. Significantly, he
led the discovery of the Tower Hill's Livengood Gold Deposit in Alaska
where over 20 million ounce of gold was found. He also led the discovery
for the Cripple Creek Deposit in Colorado, which is operated by AngloGold
Ashanti and contains over 15 million ounces of gold. Jeff served as the US
and North American Exploration Manager for AngloGold Ashanti and has an
encyclopedic knowledge of the major potential economic deposits in North
America and around the globe.

Please do your own due diligence before making any investment.