Isn’t Inflation Supposed To Be Bullish for Gold and Silver?

We have been witnessing a rotation from risk off treasuries and dollars into risk on oil, copper, US and European equities.  Gold and silver may be overlooked for riskier assets which may have been more undervalued.  This may be a short term phenomenon as gold and silver will catch up as they are the ultimate hedges against currency debasement.

In 2011, we saw unprecedented interventions by sovereign governments into the  foreign exchange markets in order to support the U.S. dollar and equities, while simultaneously putting pressure on precious metals.  So far this move is working temporarily.

Eventually gold and silver will break out similar to September of 2009 when gold broke through $1000 and eventually ran to $1900.  Likewise, in 2009 and most of 2010 silver consolidated while equities were going up. Then gold and silver soared and outpaced equities when the shorts were squeezed in 2011 when gold went to $1900 an ounce and silver to $50 an ounce. 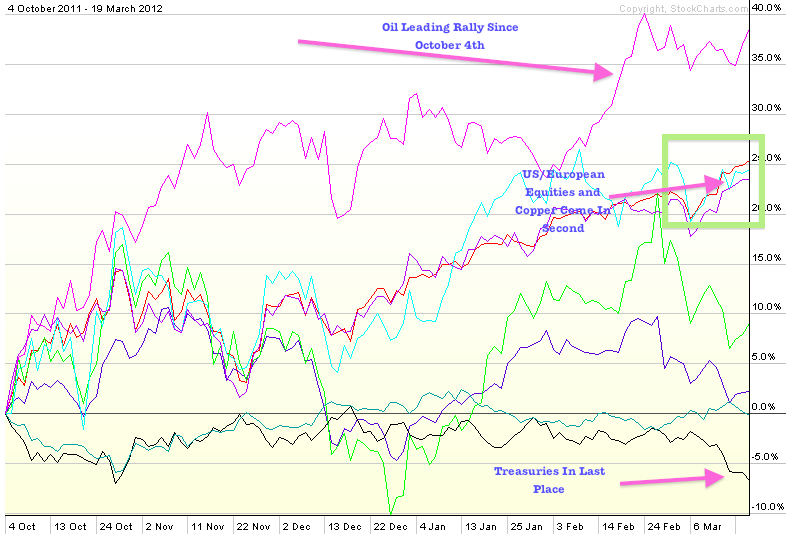 In December, we alerted our readers to a double top in treasuries and a continued move upwards in risk on assets.  Click here to see the video.  Gold and Silver have recently rallied with the risk on assets until the Bernanke testimony where investors feared less accommodative measures.  Be careful of short term anomalies especially designed to confuse, misdirect and obfuscate.  As we said in our previous essay, we believe these attempts to stem the long term uptrend in gold and silver will be short-lived and this pullback may be creating secondary buying opportunities.  This may be the shakeout before a major move in precious metals.

In early October of 2011 we made a bold contrarian call when pessimism reached a record level that we would see a powerful risk on rally in equities which hit new highs in 2012.  Then on December 23, 2011, we alerted our readers to a double top in treasuries and a continued risk on rotation into equities and industrial metals.

Now the long term treasuries have seriously broken down as investors fear rising inflation and interest rates. The recent rally in 2011 in the U.S. dollar (UUP) and the long term treasuries (TLT) represented a thin blanket for a cold night that was not going to last. Since early October, we are continuing to watch this impressive rally and the breaking out of many quality companies into new uptrends especially in the critical industrial metals and uranium miners.  The gold miners have definitely lagged in this risk on rally.

The rare earth sector is beginning to rebound as a result of an increase in M&A activity as Molycorp buys out Neo Materials Technologies for $1.3 billion. Pele Mountain (GEM.V or GOLDF) is strategically positioned in the only two historic rare earth mining camps to ever achieve production, Mountain Pass and Elliot Lake. Pele Mountain is also planning to publish an updated Preliminary Economic Assessment to optimize critical rare earth and uranium recoveries.

Listen to my recent interview with Al Shefsky Ceo of Pele Mountain discussing the recent acquisition of claims next to Molycorp at Mountain Pass and what is really unique about Pele's Eco Ridge Mine.