We have constantly advocated investments in uranium mining, particularly in friendly jurisdictions such as North America.  This support of the nuclear sector has often been in the face of formidable attacks by naysayers, using every weapon in their arsenal to denigrate proponents of atomic energy.  No other sector in recent memory has had to withstand such a barrage.

Our patience and fortitude is being vindicated by recent developments.  There is a nuclear renaissance globally especially in North America.  Witness recent announcement by Rio Tinto, who made a “Friendly” offer on top of Cameco’s “Hostile” bid.  New reactors in the U.S. have been approved for the first time in three decades.  Emerging and growing economies like India and China are going full speed ahead, while reports are confirming that even the Germans are turning reactors back on due to freezing temperatures.

Understandably, the economic upturn in 2012, fears of inflation due to skyrocketing oil prices above $110 a barrel is a factor in this atomic revival.  Nevertheless, the world is becoming increasingly aware in the deficiencies of coal, solar and natural gas to offer competitive advantages in the growing quest for inexpensive and safe source of electricity.

Observe the Solyndra solar collapse and scandal.  Countless tax payer dollars disappeared, while the private interests were rewarded.  Explosions at coal mines and the contingencies of solar and wind power are becoming increasingly evident.  Despite the Phoenix like rise uranium investors should not rush to take their nuclear chips off the table as we feel this is just the opening act for the world’s quest for nuclear ore.

The feeding frenzy for Hathor is only the beginning of major mining interests who recognize that nuclear is a logical and economical energy source for America’s future electricity.  Expanding nuclear into the energy equation will diversify our power demand and produce inexpensive electricity for our nation far into the future.    Our homes, businesses, and environment will be the beneficiaries.

Now everybody wants to get into the nuclear act.  Recently, Fluor Corporation entered the arena with the goal of developing a small-scale nuclear reactor, which is much more compact than the conventional power plants who have grown forty year old beards.

Moreover, the Department of Energy is supporting the development of smaller and safer reactors to supplant antiquated and prohibitively more expensive power plants.  These smaller reactors are intended to be safer than the old Fukushima behemoths.

Bechtel Corporation is uniting with Babcock and Wilcox, which has their own patents on the new generation of small modular reactors.  It must be reiterated that these units can serve to revolutionize the American energy industry and restore our preeminence in electrifying the world.

Sooner or later, the collective corporate consciousness will realize that a new generation of nuclear energy must be accelerated.  Not only to provide a new birth for American ingenuity, but a plethora of new jobs for an underemployed nation.

These compact units can be transported by rail and truck to existing facilities.  To build a new power plant in the conventional mode is exceedingly more expensive than moving a small unit and plugging it into a standing facility.

We are talking about economies of scale here as the need for electrical power increases in a locality.  These ingenious devices have been used in this country for many years.  Our military bases, battleships and submarines have been running on nuclear power for decades.  The concept is not novel.  The world of investors is growing increasingly aware that small reactors represent the wave of the future.  It is imperative that this concept achieves early fruition.

The Tennessee Valley Authority purchased six of these mini-units.  Surprisingly, even Saudi Arabia realizing their peak oil production may have been reached, are building the King Abdullah City for Atomic and Renewable Energy.  (KA-CARE)  As they are a desert kingdom water is a rare commodity.  These safe and inexpensive units can operate without water and produce plentiful electricity for air conditioning.

What does this all mean for Gold Stock Trades subscribers as they navigate the current precarious marketplace?  Basically it is our old mantra that development of natural resources is often a gradual process requiring money and time.  With these considerations in mind the potential payoff in profits are worth the wait.

Rio Tinto serves as a prototype of the patience required when investing in uranium stocks such as Hathor.  Quietly they have been purchasing Hathor stock.   Not only is it Carpe Diem for them, but their action now presages similar moves by other major corporations to assure a secure supply of uranium ore for at least a decade to come.

Hathor is not anywhere near production, but Rio Tinto is competing with Cameco to assure future supply at a purchase price which affords a healthy premium.  There are other prospects in the Athabasca Basin just beginning to announce new alterations and discoveries.  One small explorer that we are closely following is Athabasca Uranium (UAX:TSXV or ATURF:OTC) which stands out as a promising plum.

Our uranium selections will participate in these potential markets, especially the ones that have received all the necessary permits for construction such as Uranerz (URZ).  In fact, they have already commenced mine construction and are planning to produce yellowcake by the second half of 2012.  They are fully funded for production meaning cash in the bank and completely permitted for construction with a green light go ahead from the Federal and State governments.  To sweeten the scenario Uranerz possesses an impressive land position in mining friendly Wyoming.

Listen to my recent interview with Uranerz Chairman Dennis Higgs by clicking here.

Their strategy is to continue expanding their resource base with the cash flow emanating from their Nichols Ranch Property, thereby avoiding share dilution by plowing cash in order to continue to expand their resource base.  Wyoming is the largest uranium producing state in the U.S.A. and should be amicably disposed to the growth and development of Uranerz.

Technically, Uranerz has been breaking out of a long base bottom, which usually heralds a profitable move upwards.    Gold Stock Trades advises purchase on pullbacks within this new uptrend.  Note how the stock acted as the global markets reversed on October 4th, leading the market higher.  Such strength indicates that the basing process may be completed, anticipatory of a strong uptrend. 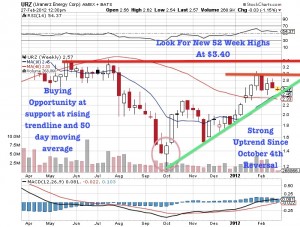 On October 4th we predicted a major breathtaking rally to break through new highs.   In general, uranium stocks are above their rising 50 and  200 day moving averages, the beginning of a new trend higher and are significantly outperforming.

Stay tuned to my premium service to get up to the minute reports and coverage on precious metals, uranium and rare earth stocks.