Long Term Trend Up In Gold and Silver Is Intact, Look For High Quality Exploration Companies

At the end of 2011, Merkel and Sarkozy got together for an unusual emergency meeting.  They pledged to come up with economic salvation.  Immediately the equity markets mounted a year end “Halleluyah” rally.   Bernanke followed Europe’s footsteps in 2012 and expanded the horizon of record low interest rates from Mid-2013 until Late 2014.

We respond judiciously to this euphoria.  Politician’s promises are usually a thin blanket for an upcoming cold night.  We have concluded since October that a surprisingly potent rise may occur which would be in reaction to the application of the stimulative paddles.

The European resolution was a response to the Franco-Belgium travails of the widely held Dexia Bank, which has tentacles into France and Germany’s economic foundations.  If this were not enough, the chronic Greek malaise indicated that Zorba was in need of another oxygen mask to rouse him from his hedonistically induced torpor.

A potent upward move in gold and silver in addition to the oversold miners (GDX) is just beginning to occur.    Our scenario was to maintain our long term core precious metal positions even though such a posture was temporarily painful as many analysts concluded wrongly that deflation, bonds and the U.S. dollar were the only safe harbors.

What about the U.S. dollar now?  Note all the media hoopla that regaled us with strength of the dollar recently.  News from Europe and Washington appears to be melting the U.S. Dollar under the cover of all of this stimulative warming.  We have called for this surprise rally we are observing in the face of all this dollar and treasury hoopla.  How uneasy must be the shorts who have been caught by this recent rise.  Short sellers went into October’s market with the largest short position since 2008.  Such a one-sided posture is often punished as the shorts run to cover and thereby add to the upward move.

Technically there have been gaps from 2011 that need to be filled on the upside in precious metals and miners.  We note that institutions have been hit hard by the gold’s price decline.   Hedge funds must’ve been selling stocks that they held in common in order to meet margin calls.  Additionally this consideration may have influenced collateral damage among investors.    Perhaps the current rise may indicate the recent downtrend has been broken to the upside. 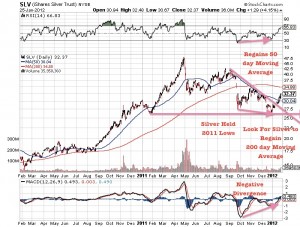 Silver (SLV) appears to have found support at its 2011 lows.  There are downside gaps that should be filled to the upside.  Silver will encounter resistance around $38.  Silver has reached a record oversold level indicated by the RSI and MACD in 2011.  This indicated an interim bottom in silver.  Monitor the bullish crossover on the MACD which confirmed the already constructive reversal on the stochastic and RSI. 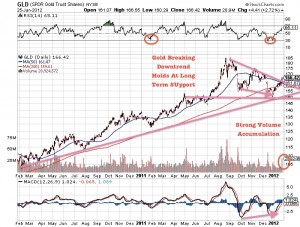 Gold appears to be making a reversal at oversold and long term support levels breaking a 5 month downtrend.  Notice the strong volume accumulation as The Fed announces negative interest rates until late 2014.  This is bullish for precious metals.  In early August through October we advised a hold and urged caution.  Since it pulled back it provided two secondary buypoints where we said it is buying time while others preached that the gold and silver market bull market had ended.  Now gold appears to be bouncing off our buypoints similar to January 2011 and regaining its 50 and 200 day to the upside.  Now the weak hands will come back at much higher prices.

Stay tuned to my free 30 day trial to my premium newsletter for market timing and stock selection.

One company I wrote a report on last Thursday in my premium service is engaged in nine joint ventures some of which are with the big boys such as Agnico Eagle at Ester Dome near Fairbanks, Alaska, which has just announced encouraging drilling indications.  Some of which are right next to the big boys in the world famous Cortez Trend in Nevada, where Barrick is continuing to announce world class bonanza discoveries as their own. In September, Barrick announced that Red Hill and Goldrush were two significant discoveries.  Barrick said on 9-7-11, "These two (Red Hill and Goldrush) discoveries highlight the potential value and opportunities that can be created through a well structured and disciplined exploration program.”

Click here to check out this project right next to Barrick's Red Hill and Goldrush discoveries in Nevada.