The Federal Reserve declared war on deflation Tuesday, stating that they will provide additional accommodations should any deflationary signs occur. I wrote several weeks ago that Washington will provide the relief necessary to rescue markets before the November election. Please click here to see article.

President Obama is in the process of changing his entire economic team before the election while voters are expressing concern and outrage over high unemployment and the real estate foreclosure crisis. There concerns are valid as our unemployment rate is much higher than reported. Although published economic reports should be studied, the most important criteria is price action because that shows the true supply and demand of the global market.

There are additional ramifications of yesterday’s statement from the Federal Reserve. China and Japan have a seriously appreciating currency versus the dollar. The dollar is gapping down to new lows. Usually a weak dollar has been bullish for stock markets as investors were less risk averse.  However, I don’t believe this will be the case this time. Sovereign nations are extremely concerned of the devaluation and are scrambling to stabilize their own economies. I believe this devaluation of the dollar will have an impact on emerging markets ability to grow and we could continue seeing a fallout of a deteriorating U.S. currency. 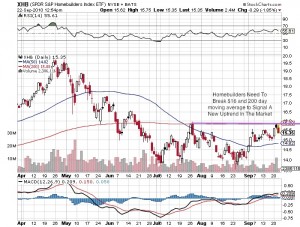 Recently the S&P 500 has made a significant rally and many are calling the concerns of several weeks ago overblown. I am still unconvinced. One reason in particular stands out, there has been no breakout of resistance in housing stocks. The homebuilders index etf (XHB:NYSE) still has not broken through the 200 day moving average to the upside. The 200 day Moving Average is a key long term indicator of trend by investors and mutual funds. It appears that the momentum indicators are signaling that it may actually encounter resistance and turn lower.

Monitor the chart of the homebuilders closely and wait for a confirmation breakout before getting excited about this market. There is way too many bulls at the moment and would not chase this overbought market. I believe a correction is close at hand and this rally may be a trap.