Power Up Your Investment Portfolio with Solar Energy

For years I have been researching clean energy investments in lithium ion batteries, nuclear, rare earths and renewables.  However, I haven't made a solar investment in years until a few months ago.  Over the years, I have been a skeptic on solar as I felt the cell technology was not yet advanced to be competitive economically.

This past year may have been a turning point in solar investments and the coming 3-5 years could see exceptional growth especially with the advancement in the Lithium-Ion Battery and Power Storage.  Solar should continue growing while natural gas and coal go extinct like the dinosaurs.  California, Arizona and Nevada are definitely leaders increasing solar capacity, hopefully my home state of Sunny Florida will increase their usage.

A lot of the growth depends on tax credits which I believe should be supported to wean ourselves off of dirty fossil fuels.  The growth of solar is increasing while costs are coming down.  I believe strongly solar will play an increasing role in our future similar to the growth in lithium ion batteries.  Investors can look at First Solar (FSLR) which technically looks like its in a uptrend.   First Solar has developed, financed, engineered, constructed, and operating some of the world’s largest and most successful PV power plants in existence.

First Solar is around a $70 stock so it may be more suitable for conservative investors.  However, if you are looking for potential outsized gains you should look at Natcore Solar (NXT.V or NTCXF), which is my first solar investment in many years.  The company just got engaged to build a solar facility in Belize.  Their Research team is working long hours improving the efficiencies of their patented cells.  If this goal is reached Natcore could partner with manufacturers as Natcore has a unique product which could be quite exciting for the solar industry.

Natcore has created a solar cell with lasers that eliminates the need for silver and high temperature furnaces.  This could have dramatic cost savings to the industry.  Natcore could be on a path to produce the highest efficiency solar cells in history at the lowest cost.

For many months I have been highlighting the increased investment interest in the clean energy space.  There is increasing interest to fund developments in renewables especially solar technology.

The problem with solar cells is that they need to be made cheaper and have greater output to become more economically viable.  Natcore Technology (NXT.V or NTCXF) has 59 patents relating to their nanotechnology research which is focused on improving efficiency and output of solar cells. 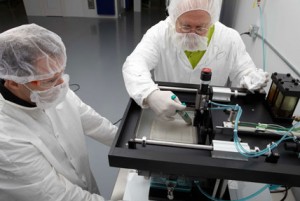 Solar cell manufacturers are desperate for technology that could improve efficiencies at a lower cost to have a competitive advantage.  Natcore (NXT.V or NTCXF) could be a situation that gets noticed by some larger manufacturers who could become a strategic partner.

Some important news developments have taken place recently which may be worthy of a rerating and a breakout as they were selected to develop a solar plant in Belize and they announced commercial efficiency levels that could make them very attractive to a manufacturer.

Brent Borland, Managing Director of Catalyst565 said, "Natcore was selected because of the acknowledged expertise of its solar scientists and engineers.”

“We have reached performance goals that make us ready to present our case to large manufacturers whose scale and resources can help us reach the ultimate, ultra-high-efficiency potential that our cells are capable of,” says Chuck Provini, Natcore’s president and CEO. 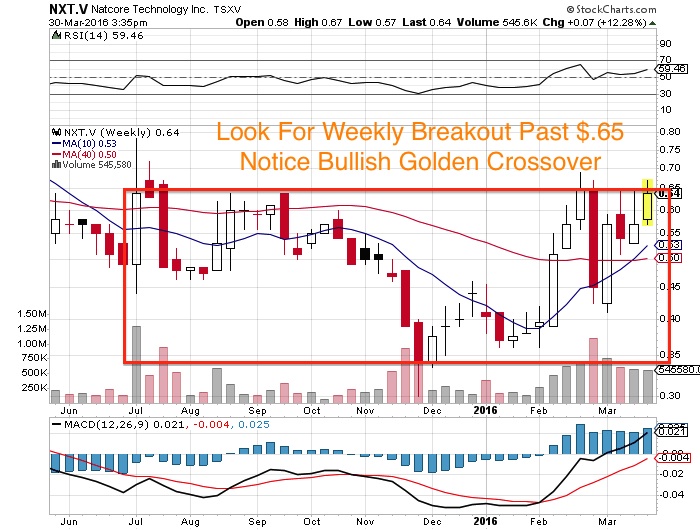 The chart looks excellent as the moving average are making a bullish golden crossover.  Look for a weekly breakout at $.65.  From a technical point of view a confirmed breakout could lead to a measured move to $.95.

Disclosure: I own Natcore and the company is a website sponsor so please do your own due diligence as I have a conflict of interest and could benefit if the share price rises.