I have been early in uranium stocks as I expected a bottom many months ago that has still not yet come to fruition.  It hasn't been easy as the commodity markets continue to be under pressure from a strong US dollar.  However, I am still accumulating uranium equities with improving fundamentals despite the negative pessimism as I believe we are finally seeing the market conditions for a major bottom.  Investing in junior miners requires patience and fortitude.  I believe it is much better to be months early then minutes too late.

All we need is follow through from major private equity funds who may be waiting in the wings ready to pounce for the following reasons.  Japan has restarted two nuclear reactors.  This is a major turnaround from their prior path of abandoning nuclear following once in a millennium accident at Fukushima in 2011.  In addition to the 180 degree turn in Japan, China continues its record pace of building and starting nuclear power plants to move away from coal which is suffocating some of their major cities.  Even the United States has started operating its first new nuclear reactor in close to three decades.  All this positive news indicate demand is increasing.  Because of decade low uranium prices, supply has dwindled as it is unprofitable to mine unless you are lowest cost producer.  Rising demand with declining mine supply equals the potential for a price spike higher.

Due to this Post Fukushima Bear Market, investors can often find situations to get in cheaper than management.  That is exciting for investors looking for bargains in companies building the strength of their balance sheets, cutting costs and increasing nearer term cash flow despite the challenging commodity market.

For instance, one company in which I recently became a shareholder Uranium Resources (URRE) saw its CEO Chris Jones make a purchase in the market of 7400 shares at $2.42.  New investors to the sector can purchase shares at 1/3rd the price.  This is a bargain opportunity especially now as they have rolled back their shares and have announced the closing of a major merger with near term producer Anatolia Energy.

Uranium Resources is now on a quicker track for uranium production with the goal of commencing development in 2016.  Temrezli has a Pre-Feasibility which shows low cash costs and impressive cash flow even at today's low uranium prices. 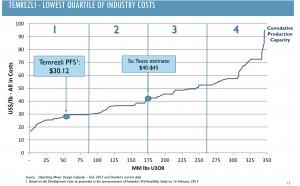 As you can see from the chart above the Temrezli Project has the potential to be lower cost than their US production by $10-$15 per pound.  It is important for uranium stocks to stay competitive with the highest quality projects which are lowest cost and nearer term producers.  Uranium Resources has experienced uranium in situ recovery operational experience as it operated US facilities for over 35 years.  The market cap is low under $50 million which is impressive as it owns of the top lower cost uranium assets in the world. 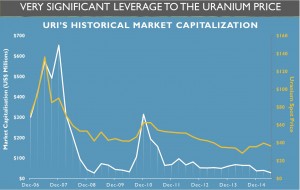 Christopher M. Jones, President and Chief Executive Officer of URI, said, “The more we study Temrezli, the more confident we are that this is one of the best undeveloped in-situ recovery uranium projects in the world.”

Construction is planned on the Temrezli Project in 2016.  What does the new Uranium Resources (URRE) offer?  The merger could save up to $11 million in start up costs because Uranium Resources already owns a processing plant and has the experienced operational personnel in South Texas with years of experience producing uranium.  Now the newly merged company could provide near term cash flow in addition to a long term call option on the uranium price with Uranium Resources extensive portfolio in Texas and New Mexico. The merger could create a much better uranium company with one of lowest cost profiles listed on the US and Australian exchanges with both near term low cost production and long term leverage on uranium.  I believe the nuclear sector is bottoming and expect that through this completion of the merger, Uranium Resources could find the mine financing needed to advance Temrezli to production in Turkey.  There is the potential for a jump in valuation as they come closer to production.  Compared to their uranium peers they are significantly undervalued as the market has not yet come to realize the significance of this merger.  As you can see by the chart below Uranium Resources now has one of the largest resources in the sector yet they are trading at a significant discount. 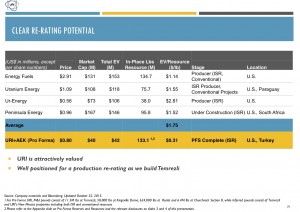 Maybe there is concern about Turkey.  It should be realized Turkey has a long history of mining with many major current Western producers.  Turkey has 8 nuclear plants under construction and Temrezli is the only advanced uranium asset with a Pre Feasibility showing Uranium cash costs around $30 a pound putting the asset in the lowest quartile in costs.  Turkey has stated they want domestic production.  The share structure is tight following the merger with around 50+ million shares outstanding.

The cost savings, personnel and synergies of the merger are too great to ignore as I believe the newly merged entity could fast track low cost uranium production as it is now on both the US and Australian Exchanges providing excellent visibility, liquidity and access to mine finance institutions.

Disclosure: I am a shareholder of URRE and Uranium Resources is a website sponsor.