For several weeks I have been expecting a major secular bottom in precious
metals and I told you to watch for the accumulation after capitulation.
See the full article from several weeks ago by clicking on the following
link:

For about the two past months, we have witnessed panic selling in precious
metals and junior miners the capitulation. However, on November 7th and
14th we saw major accumulation in gold futures on high volume. This may
signal the beginning of a major short covering combined with value buying
or the accumulation after the capitulation.

Canamex Resources (CSQ.V or CNMXF) was affected by the capitulation as it
was one of the best performers in 2014. It rallied from $.05 to $.25 for  in

2014 on great results from its high grade Bruner Gold Project in Nevada.
However, when the selling in our sector started Canamex corrected down to
$.08. It may represent a great bargain opportunity. I would say it is one
of the top 3 discoveries in Nevada right now.

Canamex just announced drill results and have just discovered a new gold
zone at Bruner that has not really been tested before called the Paymaster
Target. One of the results were 16.7 meters of close to 10 g/ton. 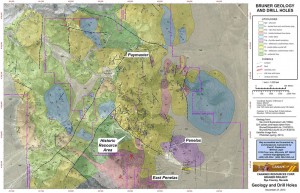 Canamex President Greg Hahn said in the news release, "The discovery of
numerous high grade intercepts at the Paymaster target area is very
encouraging for the future expansion of the resources at the Bruner
Project... the results verify the presence of attractive gold grades in an
area on patented (private) land that lies immediately adjacent to the site
the Company is entertaining for development of a leach pad for the
project...We look forward to continuing to drill this target area in
2015." 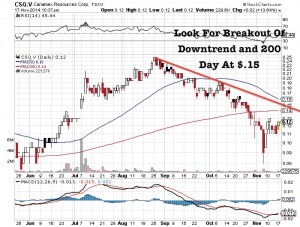 I expect Canamex to regain the 200 day moving average at $.14 as the precious metals sector bottoms and could breakout $.25 in 2015. Remember Hecla (HL) and Gold Resource Corp (GORO) who are both shareholders and current producers on the NYSE may soon take a run for the whole company. M&A is increasing and Canamex may be one of the best takeout targets in Nevada.

See my last interview with Canamex (CSQ.V or CNMXF) President Greg Hahn by
clicking on the following link:

Disclosure: I am a shareholder and the company is a website sponsor. I may
be conflicted as I would benefit if the share price moves higher. Please
do your own due diligence.