Weeks ago I forecasted black swans on the horizon that will wake investors from their summer doldrums.  I warned you about the Russian-Ukraine crisis, the rise of ISIS in Iraq and a potential war between Hamas and Israel.  See the full article by clicking here...

The junior gold miners (GDXJ) and silver miners (SIL) are on the verge of a major reverse head and shoulders breakout.  Look for GDXJ to breakout through $46 and the silver miners (SIL) to break through resistance at $14.75.  The copper miners (COPX) have made a major rally from $8.60 in March to $11 in July.  I expected this pullback before a September Labor Day Rally.  I believe the summer doldrums may be ending and we may be on the verge of beginning a major inflationary rally similar to 2003 when the US invaded Iraq.

Remember the flash crash back in the summer of 2010 when the DOW went down 1000 points.  Its possible in the precious metals and miners to see a flash spike.  Get ready for the record short positions to cover.

Most of these momentum hedge funds and high speed traders shorting our sectors could get wiped out.  The equity markets are overbought and a 30% correction would be quite healthy from a technical perspective.

As the general equities correct look for capital to continue flowing into the metals and mining sector.  Big money has already been entering the junior miners since the beginning of 2014.  This is evident by the major increase in volume in the junior gold miners.

The inverse head and shoulders is indicative of a bottoming reversal pattern.  I believe gold is on the verge of a big breakout at $1400 as well as silver at $22.

Uranium which is at a major decade low may also rebound as Japan turns back on reactors and as major mines such as Cigar Lake or Ranger announce delays or shutdowns.

The summer doldrums in the junior mining sector may already be ending.  Some of our featured companies are breaking out on higher volume.

For over two months, I have been writing about a discovery in Indonesia that has been completely ignored by the investment community.  Now Barisan Gold (BG.V) is beginning to get noticed by many junior mining investors after I highlighted it in this recent Gold Report Interview.  It is now breaking out past $.15 which I predicted only a few weeks ago in this chart that I sent out to premium subscribers. 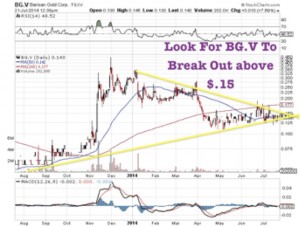 I said, "...investors may want to look into is Barisan Gold Corp. (BG:TSX.V). The company hit 412m of 1.4% copper equivalent in a gold-copper porphyry at its Upper Tengkereng discovery. It's in Indonesia, which just elected a more business-friendly prime minister. Barisan is publishing some of the best drill results that I've recently seen in the junior mining space."

Indonesia owns the richest and largest mines in the world operated by Freeport (FCX) and Newmont (NEM).  Freeport (FCX) owns the Grasberg mine which may be the world's largest and richest deposits of gold and copper. It has a humongous resource of more than 2.5 billion tones that grade an average of 1+% copper and over 1 g/t gold. Over 50% of the world's copper comes from these porphyry systems.

For several months they have been negotiating with the Indonesian Government and not a lot of progress was made as there was a major election for Prime Minister.  Now there is a pro-business Prime Minister who is already reaching out to the major miners to restart production.

Barisan Gold (BG.V) has one of the best gold-copper porphyry discoveries in the past two decades.  However, it is being ignored by the market as the asset is located in Indonesia. There was geopolitical risk with the national election of the Prime Minister and investment funds were waiting for those results.  The outcome is that the pro business candidate was elected.  This should cause more capital to flow back to resource rich Indonesia.

Barisan (BG.V) could be one of the juniors leading the mining space as their discovery has been overlooked due to the uncertainty in Indonesia.  It must be remembered that the best mines in the World are in Indonesia.  Freeport (FCX) owns the massive Grasberg Mine which is the largest and richest source of gold and copper in the world.  Over 50% of the world's copper supply comes from this one mine in Indonesia. 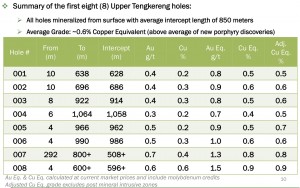 Barisan Gold (BG.V) released excellent drill results  and has been hitting incredible intercepts.  They could possibly be sitting on another Indonesian Gold -Copper elephant.  With a market cap of around $5 million and multiple hits of more than 200 meters of greater than 1% copper, it may be worth looking at Barisan should Indonesia come back into favor.

Barisan is actively drilling defining a high grade near surface zone.  They hit a major discovery with this drill hole UTD-008 and the positive developments in Indonesia could be a significant spark to this company and investment interest in this junior miner.

If you look at comparable discoveries they are being valued almost ten times the price of what Barisan is being valued at today. Once Indonesia stabilizes after this election and investors become aware of this high grade near surface discovery, Barisan could be rerated higher. 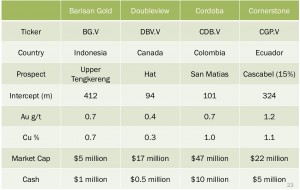 More than 50% of the shares are in strong hands and 22% are controlled by CEF Capital which is owned 50% by Li Ka-shing and 50% by Canadian Imperial Bank.  With a strong share structure and only 45 million shares outstanding, recent drilling results combined with recent election results could help the stock break out of its recent range between $.13 and $.17.

Barisan Gold (BG.V)  announced the latest set of drill results from Upper Tengkereng which showed the longest 1% Cu eq. drilled to date with over 400 meters of 1% copper starting close to surface.  Tell me of any other junior hitting 400+ intercepts of 1% Cu equivalent near surface.

The election results are positive for businesses operating in Indonesia including the miners.  I believe Barisan will receive major funding and be able to continue drilling this potential elephant in the making.  Please note there are many risks investing in early stage exploration especially in Indonesia, however the rewards here could be phenomenal as they could be sitting on an elephant in a jurisdiction that may be ready to turn the corner.  Stay tuned.

Disclosure: My family owns shares and the company is a website sponsor.