Everyone who drives a car or sits in an office tower or takes warm showers heated by natural gas should thank a special element on the periodic table called Niobium which is added to steel to make it stronger while at the same time makes it lighter and more flexible.  It is increasingly being used in the automobile, construction and energy sector specifically in the oil and gas pipelines. 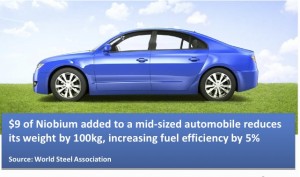 Unfortunately, niobium is a critical metal for the U.S. which is at risk of a supply shortfall.  Niobium has not been produced in America or Europe for 30 years.  The world currently is reliant on Brazil and a small fraction from Quebec produced at Iamgold's Niobec Mine.

The Brazilian economy is undergoing massive inflation and the large producer CBMM may want additional production streams to come online.  China is the largest user of niobium as they need to boost their infrastructure.  Look at the most recent earthquakes and the damage and loss of life caused there due to subpar building materials.

China needs to increase the use of niobium to protect lives from the damaging effects of earthquakes .  Unlike rare earths, graphite, zinc and iron ore, China can't produce any niobium.

Knowing this the Chinese, Japanese and Koreans each paid $2 billion to secure supply from Brazil's CBMM, the largest global producer of niobium.  This shocked the West as they were shut out from the deal.  CBMM produces around 85% of global niobium supply.

Although you may have not heard about it yet you will.  This mass ignorance is good news to my contrarian senses as niobium has a larger market than rare earths, cobalt and vanadium.  Most people out there have no clue that there is a special metal in so many things we use that makes our modern life possible.

For over two years since this major CBMM multi-billion dollar niobium deal with the emerging Eastern nations I have tried to educate investors about the importance of niobium.  I found Iamgold's Niobec asset but wanted to see if there were any similar opportunities in the junior market as that is where a studious investor can find the greatest leverage to the metal.

In late 2011, I found an asset in Nebraska that looked even better than Iamgold's Niobec as it is higher grade.  I recommended it to my subscribers and bought a position in early 2012.  Since that time the company has soared more than 400% far outperforming the S&P500. 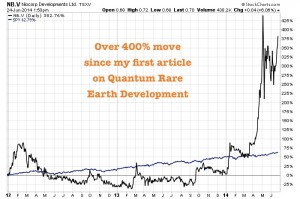 The asset was phenomenal but the stock was hammered down for more than to years due to the weak junior market.  At the time, I was a little concerned as management did not have a track record of building mines and the financing environment was extremely challenging.

Back then the company was called Quantum Rare Earth Developments and I believed that the quality of the asset and commodity would eventually attract capital and first class management.  Two years later the junior market appears to be emerging from a bear market and Quantum Rare Earth Developments is now known as Niocorp (NB.V or NIOBF) with possibly the top CEO/Mine builder in the strategic metals sector with the funding to advance the project.

No one knows how to take strategic metal mines into production like Mark Smith who restarted Molycorp's (MCP) Mountain Pass Mine.  Mountain Pass is the lowest cost, most vertically integrated Rare Earth Mine in production outside of China right here in California.  Mark also knows the financial markets as he raised over $2.5 billion for Molycorp, which has helped the U.S. solve the rare earth shortage.

Now Mark believes he can do it again and bring Niocorp's Elk Creek Mine into production.  Elk Creek could be just as strategically important and lucrative than Mountain Pass.  Niocorp is now focussed on producing a feasibility study which I think could be very economic. 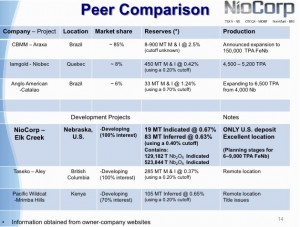 Remember Elk Creek is higher grade than Iamgold's Niobec in Quebec, which means more niobium per ton of earth mines.  Its also important to note Elk Creek has a high grade starter zone which is almost double the grade of Niobec.  This could help with a quicker payback.

Metallurgical studies will be quite exciting for Niocorp as it could show similar extraction costs to Niobec.  Elk Creek could be a big money maker for the Nebraska economy as Iamgold's Niobec makes $90 million of profit every year.  Using a conservative PE, if Mark Smith is successful bringing Elk Creek into production over the next two years it could be a billion dollar market cap.

If the market realizes that this asset could make it into production over the next few months then Niocorp has the potential to be the next Molycorp (MCP) or Stillwater Mining (SWC) who also own producing strategic metal mines in the United States.

Mark Smith is this recent interview with me believes all the potential is there for this mine to come into production as it is one of the highest grade and tonnage projects outside of Brazil.  The project has excellent infrastructure and a supportive community.

The new CEO Mark Smith has put his money where his mouth is by investing $2 million of his own money to own around 10% of the company.  It is clear in the interview that he is passionate about Niocorp's Elk Creek Deposit.  I expect the company to rapidly advance their technical and geological studies so they can fully finance the mine over the next 6 months to a year.

In conclusion, two years ago when I first wrote about this company it lacked the management and financing.  Now Niocorp is financed for feasibility and has the best person on the planet to finance and design this asset. 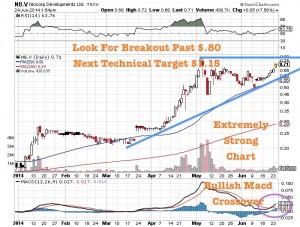 I believe Niocorp is on the verge of a major high volume breakout move near $.80.  There has been major volume accumulation and momentum building for 2 years since I originally highlighted this situation back in 2012 and more recently in early April.   See my recent interview with Mark Smith CEO of Niocorp by clicking here... or the video below.

For further information, contact Shawn Westcott at Niocorp at (604) 568-7365 or at www.NioCorp.com

Disclosure: Author owns Niocorp and the company is a website sponsor.