Edited and Updated Reprint Based on Premium Report from 12-3-13.

The time to accumulate undervalued resource assets is waning as prices rebound.  The time to buy is when they are priced at major lows with massive short positions.  Now the public is concerned about declining gold prices.  But that concern may be coming to an end.  The shorts may have already begun to cover. 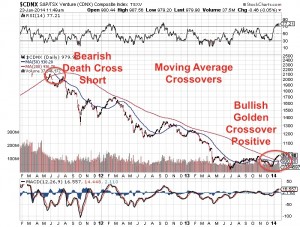 Gold has broken above the 50 day moving average and appears to head higher.  The recent decline of the Canadian Dollar and rise in both the TSX Big Board and Venture Index is positive for resource investors.

This may be signaling the confirmation of my recent prediction of a major rally in the resource sector which could possibly last 3-5 years and be extremely powerful.  Already some of these stocks are gapping higher like in the case of Zimtu Capital (ZC.V).

Zimtu is a proxy for the early stage exploratory miners and its market cap was extremely undervalued compared to its Net Asset Value of equity being held.  Zimtu may be an example for many of the early stage junior and this is typical of short covering rallies in extremely beaten down sectors.

Gold and silver may make a double bottom off of these lows and the record amount of shorts may begin to cover as we are in the midst of major rally and as the momentum players turn positive. 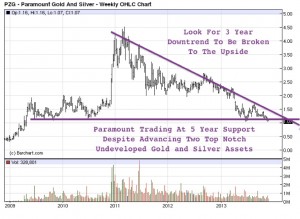 The stock may break above the 200 day moving average as they publish positive news on both their high grade San Miguel Project and the large Sleeper Project in Nevada.  Paramount has a large resource base of close to 7 million ounces of gold and around 150 million ounces of silver.  Smart resource investors already know about their high grade San Miguel Project surrounding Coeur's Palmarejo Mine in the Sierra Madre's but they tend to forget the Sleeper Project in Nevada, which may be one of the largest undeveloped resources in Nevada.  These world class assets in Mexico and Nevada provide great leverage to a rising gold and silver price.

Paramount Gold and Silver (PZG) is one of the top tier junior miners with management, money, institutional support and some of the top mining assets in the world.  Chris Crupi, CEO of Paramount Gold and Silver (PZG) has just come back from meetings with Asian investors where there is major demand for gold and silver mining assets in North America.

Asian investors should continue diversifying away from U.S. and Canadian dollars and bonds into real wealth in the earth which is trading at multi-year lows.   In addition, the majors such as Barrick, Newmont, Goldcorp, Fresnillo and Coeur D'alene may start looking for low cost projects with the ability to produce at least 100-200k ounces a year. 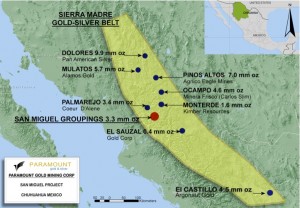 Paramount may be one of the best junior miners out there today that fits that profile.  Between the San Miguel Project in the heart of the famous Sierra Madre District and the Sleeper Project in the center of mining friendly Nevada, Paramount Gold and Silver should be an acquisition target on the radar of the intelligent mid-tier producers looking for low capex assets in stable jurisdictions.

The 12 million+ shares of shorts combined with tax loss selling is driving the price down to five year lows.  They should soon cover which could spark a major move in the price.  Who knows...maybe the shorts may be driving it down so savvy investors can acquire a major position?

We think this could be one of the worst stocks to short as it is on the radar screen of the majors who have been buying assets all around Paramount in the Sierra Madre's, Alamos, Goldcorp, Carlos Slim...etc.

The shorts may soon cover as some of the mid-tiers or majors may start bidding for Paramount which owns some of the best undeveloped assets in Mexico and Nevada, which are in the top five mining jurisdictions in the world.  In the next few years Paramount could be producing 250k ounces a year at pretty low cash costs in stable jurisdictions.

Analysts are applauding the recent metallurgical results from their 100% owned San Miguel Project in Mexico where Paramount is neighbored by major miners Coeur D'alene and Fresnillo.  These results were excluded from the earlier PEA and proves now that additional deposits are amenable to using the lower cost heap leach process.  The PEA will now be updated and Paramount will then move into Pre Feasibility.

Paramount recently announced two core drilling rigs are now operating on San Miguel.  Watch as the company may add some new high grade discoveries as the geological team has identified a 4 km vein called San Isidro and the La Bavisa target adjacent to the high grade Don Ese Resource.  Paramount should have a steady flow of drill results, news and PEA updates in 2014.

Paramount is currently trading at a major five year support level near $1.  We think PZG could find a major bottom here.  Look for the 3 year downtrend to be broken to the upside.  See a recent new interview with PZG’s CEO Chris Crupi below...

Disclosure: Author Is Long Paramount and the company is a sponsor on my website.