It has been disappointing to see the decline over the past three years in the resource sector and commodities, but it does not surprise me.  We are living in volatile, chaotic times when governments and banks will do whatever they can to disguise inflation through shorting, margin and manipulation.  Eventually, these downturns end and when they do massive rebounds begin.  When you see record shorts like we are seeing now in gold it usually signals a major bullish turning point imminently ahead. 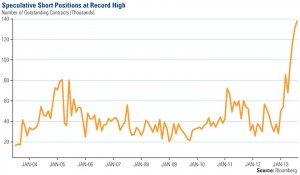 We must put this decline in proper perspective and realize that this is a counter-trend deviation from the long term secular uptrend in precious metals and commodities that occurs every few years.  The end of 2013 marked 100 years of the Federal Reserve System.  What have they accomplished? The debt of the country has soared resulting in a major loss in the purchasing power of the U.S. dollar.  It has caused the few to get rich and the masses to get poorer through a hidden tax called inflation.

Gold has soared exponentially over the past 100 years especially the past twelve before 2013.  The dollar has lost over 95% of its purchasing power over the past century.  This year marks the first annual decline in gold since 2000, which may prove to be a rare buying opportunity. 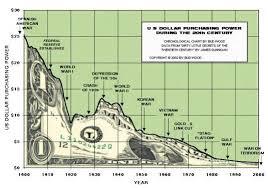 The taper is not a signal to sell gold but to possibly buy.  Inflation should start to pick up.  Notice gold and silver are still holding the summer 2013 lows and the TSX Venture is breaking above the 200 day moving average. 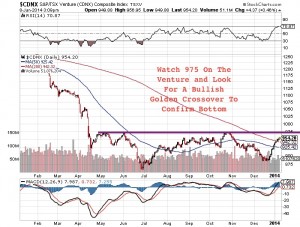 The TSX Venture is up 11 straight days. The small miners are a leading indicator and may be signaling the smart money is expecting gold to hold the $1200 bottom.  This technical reversal may forecast increased interest of smart capital into the sector.

We have already seen our featured companies such as Corvus (CORVF), Tasman (TAS), Big North Graphite (NRT.V), Lakeland Resources(LK.V) and Nulegacy Gold (NUG.V) benefit from this turn with a golden crossover.

Uranerz (URZ), Comstock Mining (LODE), Wellgreen Platinum (WG.V), Pele Mountain (GEM.V) and Canamex Resources (CNMXF) are on the verge of this major bullish trend reversal of the 50 day crossing the 200 day.  This improving technical landscape in our featured companies and the TSX Venture closing above the 200 day moving average while gold and silver is basing may signify that the recent taper and improving economy may actually be the beginning of a coming boom to the entire resource complex.

Gold and silver may be ending a healthy correction which triggered sell stops and shook out the momentum and marginal players.    Gold and silver could be putting in bottoms over the next few trading days.  Mark my words when I say you ain't seen nothing yet in this precious metals market.

This period reminds me of the late 90's when everyone was chasing high priced tech stocks and ignoring the deeply discounted junior miners.  Over the next decade great wealth was made in the resource sector and dot com and biotech investors were destroyed.

Precious metals are way undervalued.  Gold is still cheaper than the 1980 high when inflation is factored in, yet debts are exponentially higher.  Discoveries are few and far between and producers are shutting down mines.  These are the ingredients to lead to the next leg higher in gold and silver.

My job is to position my readers on the long term trend in real assets which over time should protect them from inflation and the loss of purchasing power of the dollar.  Many banks and brokers have been shorting the resource sector and getting their retail accounts to short miners.  Margin debts are reaching record highs.  This may indicate a major market correction in equities and a rise in commodities similar to early 2000.

Notice the Venture making a strong rally even as gold and silver prices are basing.  Don't short resource stocks especially when they are hitting three year lows and historically discounted valuations.  This has got to be probably the worst possible time to sell, short or to exit the resource sector and possibly the best time to buy high quality junior miners in one's lifetime.

Governments around the world have been printing fiat currency through quantitative easing and manipulating a negative interest rate policy.  Is the Euro Debt problem really solved?  Is China's banking system in trouble as well?  Investors around the world must be prepared for inflation and protect themselves from situations like Cyprus where depositors were slaughtered to pay the debts of the banks.

Although many investors are ignoring precious metals and the junior miners, I continue to encourage you to not follow the masses and the media.  Do you really believe that the U.S., Japan or the indebted European nations will ever pay back its debts?  Or that bitcoin is an alternative to gold and silver?

All these indebted countries are devaluing their currencies and forcing interest rates to extremely low levels to pay back their out of control debts.  I am continuing to buy gold, silver and rotating into the high quality junior miners trading literally for a penny of a penny on a dollar.  Gold and silver has been a form of money for thousands of years.  Who knows where bitcoin will be in two or three?

When the debt storm returns like in 2010 and 2011, we may see a major move into tangible assets especially gold, silver and some of the high quality junior miners in safe jurisdictions like Nevada.  This move in precious metals could come rapidly at anytime.

Don’t try to time the bottom as only liars can ever catch it.  One could easily miss the powerful upswing where investors can make exponential gains on their money.   New value buying after tax loss selling combined with short covering could lead to major gains in the miners in the first quarter of 2014.  A turnaround can occur any day. 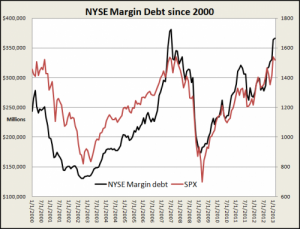 We know these margin fed rallies usually end with a lot of pain and these sell offs in the miners provide the best buying opportunities.

With regards to gold and silver, I believe we are very near a bottom.  I see the downside risk as maybe $50 and the potential upside of thousands of dollars.  The time to buy is when funds are facing redemption and marginal players face capitulation.  We may have seen that at the end of 2013.

Experienced players have never seen the shares at such bargain prices and are continuing to accumulate.   The majors are already beginning to make major changes, selling assets and cutting expenses.  We may be near a major bottom that comes around maybe once in a lifetime.

I never thought we would see this buying opportunity happen again in my lifetime but the media, who are owned by the banks who have shorted this sector to oblivion, have wiped the marginal investor out and forced them to sell assets for pennies on the dollar.

This is the law of the casino.  Many go home empty handed, while only a patient few come out winners.  I believe the selling capitulation now is giving value investors a major gift who may soon enter this beaten down sector big time.

Look for savvy investors come swooping in to pick up shares in early 2014 as they may see unbelievable opportunities in this space.  Smart investors are on the lookout for assets trading at significant discounts to what major investors paid recently.

For instance, one company which I have just recently bought and plan to buy more of is Canamex Resources (CSQ.V or CNMXF).  Hecla paid $.18 back in 2012 before amazing discoveries.  Now Canamex can be bought at around 1/3rd of that value despite hitting unbelievable results in 2013.  Some of the best I have seen from Nevada. Canamex controls the Bruner Gold Project in mining friendly Nye County, Nevada where they are making a major new gold discovery.

The project is extremely well located in an area of multi-million ounce deposits near the famous Round Mountain Mine two hours southeast of Reno.  Canamex has made some very positive discoveries recently at the project.  The company is demonstrating that there are high grade feeder zones on the property that could be used as a starter pit.

Canamex continues to hit amazing results on a consistent basis and attracted the attention of major gold producers such as Hecla who came on as a significant shareholder after months of research and due diligence on the asset back in 2012.  Hecla bought a major position in this company around 15% at $.18, around three times higher than where it is now.  This investment of capital, an active representative on the board and technical expertise came after six months of due diligence and analysis.

Investors can buy it now at close to a 1/3rd of that Hecla's purchase price.  Over the past year, Canamex has made unbelievable geological progress.  Canamex has released some awesome holes from both the historic resource area and the new discovery at Penelas East. 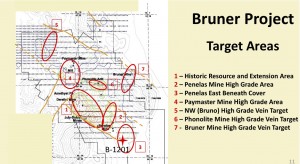 In the historic area they hit 57.9 meters of over 5 grams/ton.  In addition, The Penelas East Target is one of the seven target areas on the property and the technical team has hit on 38 out of 44 drill holes with some of the best results being over 100m of 4+ gram grade.  They released results of 79.9 meters of 1.5 grams per ton.

In a regular resource market these high grade results over large intersections would get the market very excited and the stock should fundamentally be at much higher levels despite a struggling gold market.  As the resource market turns Canamex may be one of the first takeover targets from a major and may see increased interest as investors return to the sector in 2014.

The metallurgical studies of both the historical resource area and Penelas East show that this could be a lower capital intensive asset.  These geological and metallurgical results warrant further funding in 2014 as this could be the type of asset an emerging major like Hecla would want to own 100%. 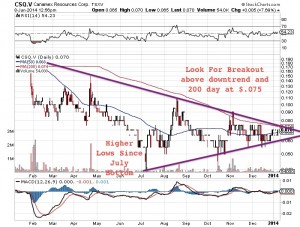 Look for Canamex (CSQ.V or CNMXF) to breakout from this ascending triangle at $.075.  Notice the strong accumulation in the fourth quarter of this year as the company appears to be forming a bottom since this summer. Technical traders are looking for a golden crossover of the 50 and 200 day moving average which indicates a major trend change.

Listen to my recent interview with Bob Kramer, CEO of Canamex Resources (CSQ.V or CNMXF) by clicking here...  We discuss the recent discovery and what sets Canamex apart from so many of the junior miners.

Disclosure: Author/Interviewer Owns Canamex and the company is a sponsor on website. Conflicts of interest apply. Do your own due diligence.