Uranium Miners Are The Hottest Spot In The Resource Sector

For over two years now the uranium price and the uranium miners have been in a correction as the market factored in an oversupply of uranium from Japan and Germany moving away from nuclear power following the Fukushima Disaster. Long term investors realize this may provide a discounted buying opportunity as Japan and Germany now face the consequences of those knee-jerk political moves, slowing economies and rising electricity costs.

The anti-nuclear Party in Japan has been relegated to a powerless minority. Could Germany make a similar move to oust Merkel this September as electricity costs and air pollution skyrocket from burning oil and dirty coal?

Japan is about to turn on twelve nuclear reactors that have been idling since Fukushima. Don’t be surprised to see Germany do something similar this fall. Uranium is trading at seven year lows. Recall what Joseph told Pharoah thousands of years ago, that there would be seven fat years followed by seven lean years.

Uranium is around $100 below its $135 per pound all time high in 2007. Uranium has not been this cheap since 2006, seven years ago. These low prices are attracting savvy, value investors who believe in a major bullish reversal in price. 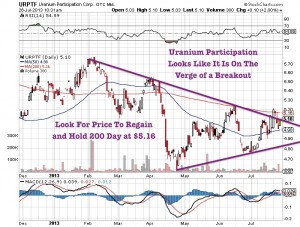 The uranium price looks like it is on the verge of a major bullish reversal.  Look for Uranium Participation to hold the 200 day at $5.16 and confirm recent strength on the back of the Japanese election.

The cost to mine uranium is more than double it costs to buy uranium on the spot market. That is why I believe we could see Cameco or major miners such as BHP and Rio Tinto take some of their cash and purchase uranium from the spot market instead of mining it or by buying cheap resources for pennies on the dollar.

Historically, the best time to buy a mine is when no one wants it and when the miners are struggling with low prices. Look for increased Merger and Acquisition activity as companies with cash look to buy assets for pennies on the dollar.

Uranium is the one sector where we are witnessing increased M&A activity and corporate financings despite the resource sector bear market. Smart, deep pocketed acquirers are speculating that the sector will see a turnaround. The psychology of the sector is turning positive as even environmentalists are realizing that without nuclear the world will have a greater dependance on dirty fossil fuels.

Investors should look to add to their uranium exposure. One way is through Uranium Participation Corp. (U.TO or URPTF) which is one way to get exposure to the yellow metal without the risks of mining as it closely tracks the uranium price. Cameco (CCJ) the largest publicly traded major is up 30% since November 2012 even when uranium is flat. 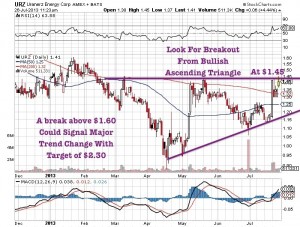 Uranerz Energy (URZ) who is coming close to production and already has a processing agreement with Cameco is on the verge of a major breakout at $1.45. Imagine what sort of gains these uranium miners are going to make when uranium is actually going up in price. Investors are just beginning to realize what I have been saying for many months.

Nuclear reactors are being built all around the world despite the media claiming nuclear is dead. China, India, South Korea, United Arab Emirates, Turkey, Saudi Arabia...the list goes on and on. The world is already in a shortfall as the demand exceeds supply from mining. Secondary sources from nuclear warheads have made up a big difference over the past twenty years, but that is set to expire.

Some of the U.S. utilities have prepared for this such as Exelon which has 17 nuclear reactors. Exelon has an off take agreement with Uranerz. Some believe that uranium will not start spiking until 2016 as there may be an oversupply from Germany and Japan. I disagree and think those analysts are wrong.

Uranium is much cheaper right now than natural gas which has doubled from $2 lows and oil which is breaking the $108 mark. Utilities would be wise to stockpile uranium at these levels as oil and gas prices are extremely volatile. Large miners such as Cameco should look to acquire emerging producers such as Uranerz, which just provided a corporate update to the market.

Uranerz announced they have completed drilling of the first of two deep disposal wells. This means the company is on track to start producing uranium at the end of this year or early 2014. Uranerz is also working with the State of Wyoming to close the $20 million loan. 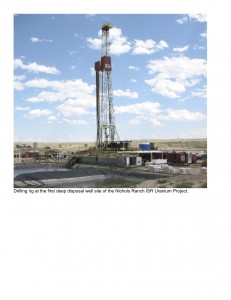 Hidden from the mainstream news is Japan’s search for uranium in Uzbekistan. For weeks I have informed my subscribers that Japan is looking to turn the nuclear reactors back on. Recently, the Japanese people elected a majority supporting Prime Minister Abe's pro-nuclear agenda. Twelve reactors already have applications to restart.

Only two nuclear reactors in Japan are operating, but that may be changing soon as the utilities apply to have twelce more reactors come online. Electricity costs have been skyrocketing as the yen continues to lose value and as natural gas and oil prices continue to make gains.

Not only is Japan holding on to all of its uranium, but it is looking for more. Japan needs cheap and clean energy. The Japanese Government continues to advance a pro-nuclear agenda domestically and around the world as companies struggle with a weak economy and rising energy costs.

With oil and natural gas prices soaring, uranium is cheap around $40 a pound. This price may not stay this way for long. The Russian Highly Enriched Uranium (HEU) program ends at the end of 2013. This is about 24 million pounds that will come off the market.

At these low uranium prices, the Russians are unlikely to amend the Megatons to Megawatts deal. They are losing money on the processing. In addition, many mines can’t operate in this price environment. This will pressure potential supply.

On the demand side, there are more plants being built all over the world now than before Fukushima. The Japansese restart with the Pro-Nuclear Majority could be a major catalyst this summer. Once more reactors come back online in Japan, confidence could return to the sector.

Watch the U.S.A. as it may be in an uranium supply crisis. The Americans have not been securing major uranium deals like the Japanese, Chinese, Koreans and Russians yet. They may need to start to secure supply in a big way.

That means the U.S. relies on imports for more than 92% of its uranium consumption to keep these plants running. This is a far cry from energy independence and makes savvy investors realize that in today's world of rising geopolitical turbulence, the importance of safe and secure uranium supplies.

In addition, a large part of the supply of uranium comes from the nuclear missiles from Russia. This agreement is about to expire at the end of 2013. This is about 24 million pounds annually which will no longer be supplied by the Russians. Uranium investors are anticipating a stronger market for uranium into the second half of 2013. The Russia-US agreement expires the end of this year and The Japanese should restart nuclear reactors that they shut down in 2011.

Uranerz Energy (URZ) is planning to start producing uranium at the end of this year or in early 2014 at their Nichols Ranch in the Powder River Basin in Wyoiming. The company has contracts with major U.S. utilities to sell uranium at much higher uranium prices.

This gives the company some certainty that there will be some positive cash flow as they move into production. Uranerz has an enviable and strategic position in the Powder River Basin in Wyoming which hosts the largest producing uranium mine in the U.S.A. Cameco, the largest publicly trade uranium miners, is expanding production to the north and south of Uranerz and already has a processing agreement with Cameco to process the uranium.

Look at the rising momentum, despite lower lows. This is a negative divergence between price and momentum which usually accompany major reversals. Look for the 200 day moving average at $1.33 to be broken to the upside as well as a break above 50 on the RSI.  I believe URZ will rebound off of three year lows and will move into an uptrend as it moves closer to production.

Listen to my recent interview with Uranerz’s Executive Chairman Dennis Higgs as we discuss the current uranium supply crisis in the U.S.A. and how Uranerz is advancing towards production. Dennis is well known in the resource community with a track record of success. He founded Arizona Star Resources which was bought out by Barrick in 2007 at over $800 million.

Uranerz Contact Info for further research and due diligence.

Disclosure: Author and Interviewer owns Uranerz and the company is a sponsor on my website.