Cameco (CCJ), one of the world's largest uranium producers came out with earnings below analysts estimates as the price of uranium continues to base at the $40 mark.  Look for a possible bullish reversal despite the negative news.  Remember earnings reports are lagging indicators and do not show the potential growth in the uranium sector.

The uranium price is down 40% percent since the Fukushima disaster in March of 2011 as Japan and Germany made a political, knee-jerk reaction to shut down reactors and rely heavily on natural gas.  Many investors continue to look backwards, contrarians like us take a look forward.

Natural gas is above $4.25 and rising.  It has doubled over the past year.  The Fukushima reaction may have been a boom to natural gas in the short term, but utilities are passing on the high costs to consumers.  Japan and Germany who have relied on importing natural gas now have some of the highest electricity costs in the world and this is causing a major backlash from domestic industries.

Consumers are being crippled by these high rates.  Voters have elected in a pro-nuclear government in Japan and may oust Germany's Merkel as the economy is on the brink of recession.

Keep a close eye on Uranerz which just announced that they have received the support from the Attorney General, State Treasurer and Governor of Wyoming for a $20 million loan to fund the completion of construction at its Nichols Ranch Project in the Powder River Basin.  This non-dilutive loan has a low interest rate of 5.75% and could be repaid over seven years. 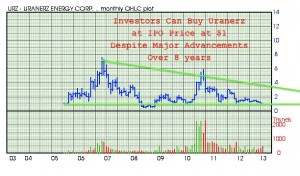 "We are very pleased to be working with the State in arranging this non-dilutive, low cost form of financing which will fund completion of construction at our Nichols Ranch ISR Uranium Project in Johnson County," stated Mr. Glenn Catchpole, Uranerz' President and CEO. "The Industrial Development Revenue Bond program is another positive example of how the State of Wyoming supports the minerals industry, helping make it number one in America in uranium, trona, bentonite, and coal production." 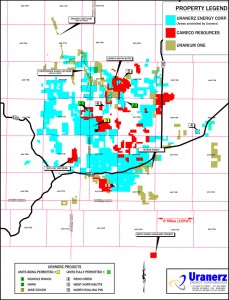 Remember Uranerz controls one of the best land position in the Powder River Basin and surrounds both Cameco and Uranium One.  Uranerz has one of the best management teams in the business with experience building and constructing new mines.  Do not forget Uranerz already has a processing agreement with Cameco and has long term sales contracts with the largest US utilities (Exelon) at much higher uranium prices.

As many of our investment colleagues are paralyzed with fear and hysteria from the volatility in the resource sector, I will take a step back and look at the long term charts and fundamentals in the uranium sector.  More than two years ago a once in a millennium earthquake and tsunami devastated Japan and their nuclear industry.  In addition, at that time a hugh inventory of natural gas hit the market and prices for natural gas fell to all time lows.

This was two formidable uppercuts to the sector which could’ve sent the industry to the canvas for a 10 count.  The uranium stocks are showing they have a good chin and have not violated either the Fukushima lows or the 2008 lows despite a very low short term spot price around $40.

Investors over the past few years may have believed natural gas would be our long term energy solution.  Since natural gas hit a low at $2 in 2012, it has doubled and is no longer an affordable option.  It has broken above the critical $4.25 mark which will influence utilities to look at cheaper alternative sources.

The uranium price at $40 will see an increase in demand from global utilities to replenish their stockpiles. Utilities may increasingly look at cleaner and cheaper uranium which is near major, bargain basement lows at $40 per pound.

Some investors panicked out of the sector due to media scare tactics and sold their uranium miners at major lows.  Analysts claimed the sector would never come back after Fukushima.  I disagreed and they were wrong. 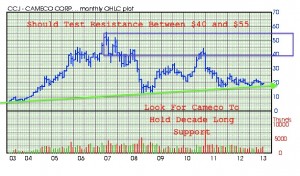 By looking at Cameco (CCJ), the largest publicly traded uranium miner, the price has not violated 2008 lows despite a 1-2 combo to the chin.  Clearly the long term uptrend is intact.  I believe this is an area of strong support for the uranium mining industry.

Germany and Japan who at first wanted to shut down their nuclear plants have realized that the economic costs are just too great.  Next generation nuclear technologies are safer and more efficient than the fossilized plants like Fukushima which were built in the 1970’s.  These nuclear fossils should’ve been expired years ago, but they were cash cows supplying tons of cheap and clean energy.

In addition, countries like China and India are dealing with debilitating air pollution from dirty fossil fuels.  They need to increase energy capacity and bring air pollution down.  The only solution is to invest in nuclear.

Mark my words over the next two decades there will be more nuclear plants built to combat air pollution and to provide affordable base-load power.  This comes at a time when supply is very limited.  Most mines can’t operate at these low prices.

Majors are in search for lower cost, higher grade uranium mines.  Increasing takeovers should become more common as we witnessed with Uranium One being taken over by the Russians and Fission being bought out by Denison for their Athabasca Basin assets.

Do not forget about the Russian HEU agreement which expires at the end of this year, where a large amount of U.S. uranium supply originated.  It should be noted at this low uranium price the converting of uranium from warheads is too expensive.  The major producers will need to look for low cost production in either high grade uranium assets or in in-situ projects with low cash costs.

European Uranium (EUU.V or EUUNF) stands out in the junior uranium space as well as it owns the high grade uranium Kuriskova deposit in Slovakia that is at the advanced Feasibility stage.  Europe only has one uranium mine currently in production.  This project could be the next major uranium producer for the European Continent and is expected to come into production at the end of this decade. 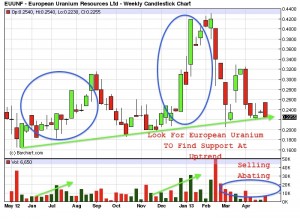 It is one of the highest grade advanced projects outside of the Athabasca Basin.  The company published a pre-feasibility study that demonstrated the Kuriskova Project could be one of the lowest cost uranium producers.  Unlike so many other juniors, European Uranium's project is at the advanced Bankable Feasibility stage.

The deposit is located in Slovakia where over 60% of its power comes from nuclear, yet the country has no domestic supply.  This project could fill Slovakia's increasing uranium demand and even export a surplus to neighboring countries.  Europe is the largest per capita user of nuclear power and plants are being built throughout Europe as I write this.

European Uranium made a major milestone in 2012 by signing a memorandum of understanding with the Slovakian Government.  This agreement recognizes Kuriskova as a strategic asset that could provide the country with its own domestic uranium supply.

European Uranium is advancing toward publishing a bankable feasibility study on Kuriskova.  The company is continuing to build local and federal support with the Slovakian Government.

Do not forget European Uranium has some very interesting uranium exploration properties in Sweden and Finland.  The company would like to advance some early exploration targets later this year.

I would like to invite you to check out my recent interview with European Uranium CEO Dusty Nicol below.  I always enjoy talking to Dusty as he has over 30 years experience in the mining sector both in exploration and mining.  He is also fluent in five languages and has worked in mining all over the world.  Dusty is a graduate of MIT and Indiana University.

Listen to other interviews with movers and shakers in the mining industry below...