The Next Price Spike Could Be In Food

Potash or potassium salts are amazing fertilizers.  They make the plant stronger and improves output.  Potash helps the physical condition of the crop boosting vitality.  It helps a plant's immunity to withstand drought, infection and parasites.  Do not forget that potash is also used in drilling, building materials, paper, pharmaceuticals and other products.

Continuing interest especially out of Asia, India and Brazil for a secure long term supply could boost global demand to 75 million tons by 2020 and boost the need for junior potash developers.  These countries have major supply demand imbalances.

Arable land is declining per capita and this means farmers will need to boost yields.   US imports 90% of what it consumes and only produces 1 million tons a year.  Domestic agricultural giants may need to secure a domestic supply of potash.

Presently there is sufficient supply from but rising demand with limited output could force countries like China, India or Brazil to strategically partner with some high quality junior potash developers to secure long term off-takes.

China is now the largest consumer of potash, Brazil's sugar cane and soybean industry relies on potash, India imports 100% of its potash, Malaysia and Indonesia is a key growth market as it is used to produce the oil palm.

Enter center stage, Passport Potash (PPI.V or PPRTF), which has a unique and large position in the Holbrooke Basin in Arizona with control of about 191 sq. miles.  Arizona is one of the most mining friendly jurisdictions in the U.S. and this area is able to mined year round.  The basin is well suited as it is quite shallow compared to the mines in the Saskatchewan area.

Check out my recent interview with Passport Potash Chairman David Salisbury.  David has over forty years in the mining business and seventeen years with world mining giant Rio Tinto.  During that time he was the leader for the Rio Tinto global improvement program.

Passport's project is well located and has access to the railway which is on the property and two major highways which intersect the property.    International shipping and the world's largest seaports are located 550 miles away in California.  The deposit is very shallow compared to its peers.

All these technical advantages means that the capital and production costs could come in much lower for Passport compared to its other junior competitors in the recent Preliminary Economic Assessment (PEA), which was recently published  This is a significant time for Passport which only has a market cap of $30 million compared to its higher valued peers who have a PEA with much higher costs.

Many of their peers with PEA's trade at market caps around four times of Passport's.  The recent third party-independantly verified reports showed impressive economics and that Passport is one of the best potential potash producers.  The company believe it is one of the lowest cost potash projects with the potential of being one of the highest return in development right now.

Passport Potash is looking to work with a strategic partner as they move closer to its Feasibility Study due by the end of 2014.  I would not be surprised if an agreement is signed sooner rather than later. 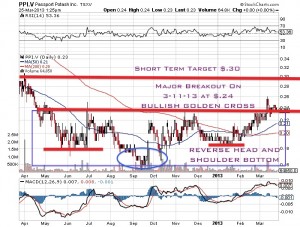 Passport Potash is forming a major two year base and the trend may be turning higher as it makes a bullish golden crossover of the 50 day (10 Week) and 200 day (40 Week) moving average.  This is the first time the stock has made this bullish development since 2010 when the stock went up ten-fold.

The bullish fundamentals for Passport combined with an excellent basing chart looking to breakout higher makes it quite an interesting opportunity.

Disclosure: Passport Potash is a sponsor of my free website.