The Search Is On For Antimony Deposits In Atlantic Canada

World equity markets are soaring to multi-year highs not seen since before the 2008 credit crisis.  China is rebounding, Japan is recovering, U.S. Housing and financials have had a major rally in 2012. 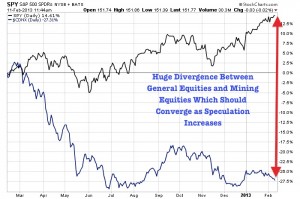 These major accommodative actions from Central Banks since the 2008 credit and housing crisis has helped boost an economy which was on the brink of failure.  Central Bankers around the world have chosen an inflationary scenario.  While the general and world markets are hitting new highs, I am still seeing bargain opportunities in the strategic and industrial metal miners.

The strategic mining sector may attract the attention of industrial end users who are seeing their stock valuations hit new highs.  They may use some of their record cash positions to secure supply of strategic and critical metals.

Keep a close eye on antimony which is used in batteries and in many manufactured materials as a flame retardant.  China is the top producer with control of close to 90% of the world supply.  China is followed by South Africa, Russia, Bolivia and Tajikistan which are far from mining friendly jurisdictions. 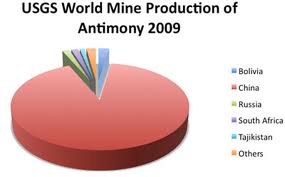 The Chinese are finding it difficult to find new deposits domestically.  In 2011, the British Geological Survey ranked antimony as the main metal at risk of a supply shortfall.   Production in China is falling and the Chinese have had to mine antimony right here in Atlantic Canada.

The Beaver Brook Antimony Mine owned by Hunan Nonferrous Corp., a Chinese company has been an antimony producer.  It was bought in 2009 for around $30 million.

Recently an important news about this mine crossed my desk.  The Beaver Brook Mine, the only North American producer of antimony is shutting down and laying off 104 workers.  The Chinese owners Hunan Non-Ferrous Metals who bought the Beaver Brook property in 2009 says that the quality or ore has dropped and that it needs to do further exploration.  The Chinese are indicating that they will continue prospecting activities.

Enter center stage, exploration small cap Great Atlantic Resources (GR.V) who owns claims surrounding and adjacent to the Chinese Beaver Brook operation in Central Newfoundland.  They are exploring for highly sought after elements such as antimony in Atlantic Canada. 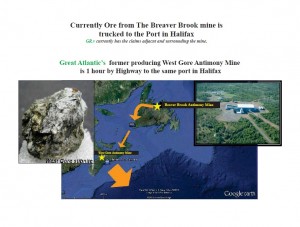 Atlantic Canada was recently polled as one of the top mining friendly jurisdictions in the World by the Fraser Institute.  Antimony is one of the most critical commodities on the planet and the price is in a major uptrend. 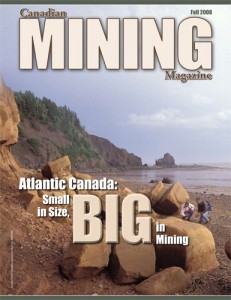 Outside of China, some of the largest producers have come from Atlantic Canada including the Beaver Brook Mine which was bought out by the Chinese in 2009 for around $30 million.

Great Atlantic controls the extension of that property.  In addition to Beaver Brook, for the past 18 months, Great Atlantic Resources assembled an impressive portfolio of antimony assets in Nova Scotia, New Brunswick and Newfoundland.

Antimony is in the top three sought after critical elements with only eight years of known supply.  China controls the sector.  Antimony is used mostly as a fire retardant as well as batteries, touch-screens,ceramics, glass and ammunition.  It is one of the few elements during a difficult economic time whose price has held up.

Great Atlantic's management and technical team has a proven track record.  The CEO was instrumental in selling an open pit tungsten mine in Atlantic Canada.  The team has several mine-finders who have discovered significant assets.

Some people in the company have over 30 years of experience in exploring and finding assets in Atlantic Canada.  Maybe the Chinese will look at Great Atlantic’s increasingly valuable and critical antimony assets?

All the financings and acquisition were done around $.10 in 2012.  Any price below that may be a discount.  We are witnessing increasing momentum as GR.V forms a double bottom. 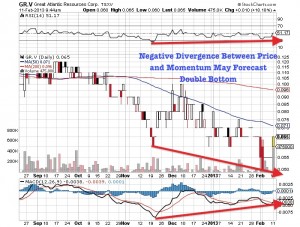 This is historically indicative of a reversal.  Look for $.08 or the 50 day moving average to be broken to the upside as 2013 could be a significant year for this early stage explorer in Atlantic Canada searching for the most critical elements.

See the video below of my recent interview with Chris Anderson, CEO of Great Atlantic where we discuss antimony and Beaver Brook Mine.

Disclosure: Author owns shares and Great Atlantic Resources is a sponsor of my website.  I am not a registered financial advisor.  Please do your own due diligence.