Why Precious Metals, Uranium and Rare Earth Miners May Outperform in 2013

Gold Stock Trades is still climbing the wall of worry as wealth in the ground metals becomes increasingly cheaper in a world that is threatened with the ghosts of depressions and deflations past.  We observe the doubters who regale us with the view that the miners are underperforming bullion and the general equities.  They claim that housing, financials and the dollar has bottomed.  We disagree.  Gold, silver and the undervalued miners may be bottoming and a reversal may occur in 2013. 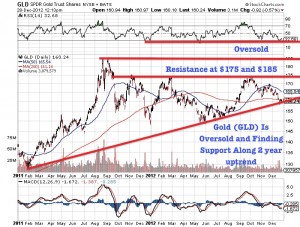 The world is navigating troubled financial waters.  Over the past decade Central Banks have injected a flood of dollars into an ailing fiscal system.  The result of a flood of bailouts and entitlements has been a short term bounce in the toxic sectors of U.S. debt, real estate and financials as the Fed artificially manipulates the price by printing dollars to buy these troubled assets.

Precious metals, uranium and rare earths have corrected for most of 2011 and 2012 as The Fed  has successfully boosted the toxic housing sectors and US debt while keeping a lid on precious metals and commodities.  A good job has been done to misdirect investors off of the long term supercycle in real assets, discredit precious metals and natural resources and create an illusion of deflation.

Refer to our notes of October 4th and video on October 5th of 2011 in which GST called for a major reversal, which indeed did occur in the last hour of trading.  Since that time we have witnessed a strong rally in general equities for close to 15 months, however we observe that the miners and Venture Index did not keep pace.  This divergence between the S&P 500 and the TSX Venture is historic.  Contrarians look for opportunities like this where the Venture is extremely discounted to make triple digit returns in coming years.

This decline in the mining sector may have been exacerbated by margin rate hikes in gold and silver, the Fukushima Disaster and obfuscation from the Fed that they would not announce further QE every time gold and silver were about to breakout into new highs.  Gold and silver have been basing and rangebound for many months.  We expect that 2013 could mimic early 2009 when the miners bottomed and outperformed the general equity market.  The first two years of Obama's first term were exceptionally good for the small miners and precious metals. 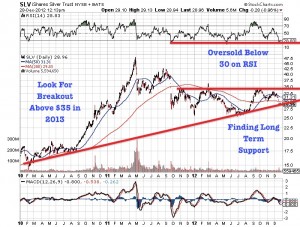 Now we hear the voices of the Precious Metal Cassandra’s and the prophets of doom as they inform us that the gold and silver rally is devoid of lasting power.  We disagree.  The Fiscal Cliff and the economic cancer of debt continues to metastasize.

Right before the U.S. election, the market got a boost as the Fed announces QE3 to infinity and further purchases of mortgage backed securities and treasuries in the recent December meeting to hopefully cushion the impact of falling off the Fiscal Cliff.

Long term rising precious metal markets love climbing walls of worry which are in this case spreading malignantly.   The U.S. Government and its European acolytes have failed to address the real issue of the malaise in which the world finds itself.  Specifically, the cancer consists of too much reckless spending and dependance on governments whom one suspects doesn’t really know what is going on.

Gold and silver bullion appears to be bouncing off of strong support, while the U.S. dollar is forming a bearish head and shoulders pattern.  The elites of the west possess all they need for the wives, children and grandchildren to live in splendor.  They are trying to solve fiscal malignancies with fiat dollars, which is destroying savers who are getting negative returns at the local bank.

Our leaders are addressing the debt problem with financial band-aids.  This is a perilous Keynesian experiment, which has long ago been disproven, but which arises every time capitalism reaches for a solution and comes up with the old pump-priming.

Eventually, the masses will realize the economic malaise the world is in and will seek out undervalued wealth in the earth assets which our society is increasingly dependent on.  Everyone  has a smart phone even small kids and they all want the good things of life for their families.  This requires increasing amounts of critical metals and energy.

Critical minerals, uranium and precious metals are already in a supply shortfall, while Central Banks in Europe, Japan and the U.S. continue to devalue their currencies through QE.  These are ingredients for a price spike in several strategic commodities.  This move may be right around the corner in 2013.

We are reaching a societal point of no return where entitlements can no longer be afforded.  Investors currently think we can make everything right by monetizing the debt.  We disagree as all this printing could lead to supply shortages and gut wrenching inflation.

To paraphrase the great trader Jesse Livermore, “We must be like a merchant who foresees future demand, purchases his line and patiently awaits for profit taking time.”  Investors in wealth in the earth assets should listen to Livermore’s wisdom.

In due time, these commodities which are low priced will come back into vogue.  In order to be right in the market, the majority has to believe you are wrong.  Great investors like Livermore and Baruch were able to have confidence to hold on even when the positions were not popular. 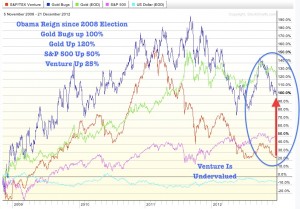 Hard asset investors have been swimming against the tide for over 22 months.  Many have already thrown in the towel.  Typical bears last about 18 months.  We are already way overdue for a reversal and this may be exactly the wrong time to get caught up with the summer soldiers and sunshine patriots who flee from crisis exactly at the wrong time.  Smart investors must fight the short term currents that favors toxic US bonds, financials and housing.

In conclusion, what does all this mean?  As time goes by the only true repositories of wealth exists in the natural resource area as it has since the days of Athens and Rome.  Oddly enough after millennia we have come full circle, the same countries and the world's greatest empires are going broke.

History may not repeat, but it recurs.   Monitor a potential breakout in gold and silver in 2013.  Critical minerals such as rare earths, graphite, ferro alloys, tungsten, antimony and uranium may be slowly forming a bottom from which up moves occur.  The junior miners and the Venture are extremely undervalued compared to the S&P500 and the gold price.   Get ready for the downtrend to turn in 2013 and stay tuned to my free newsletter for updates.

We will be speaking at the Vancouver Resource Investment Conference on January 21st, 2013 at 1PM.  Register for the conference for free by clicking here... and watch the video below.