There may be an increase in Mergers and Acquisitions in the mining sector.  The majors are seeing share price increases which puts them in a stronger financial position to be able to buy undervalued miners with near term production.  Miners are looking to Europe where a cheap Euro means better margins and costs for European miners.

Look at Greece which is developing four major mines.  For years, Greece was a difficult jurisdiction for miners to operate.  However, the economic collapse with soaring unemployment in the country forced the government to find ways to create jobs.

Greece is focusing on revitalizing the mining sector by fast tracking four mines that are in development.  Athens hopes to be the biggest producer of gold in Europe by 2016.  The politicians realize that the mining sector has great potential to create high paying jobs and revitalizing a moribund economy.  For years prior to the economic crisis, mines in Greece were help up and permits were delayed by red tape and bureaucracy.  Now that has changed as witnessed by Eldorado Gold's (EGO) $2.4 billion takeover of European Goldfields, which prior to the acquisition received critical permits.

Similarly in Spain, The Galician Government has labeled Edgewater's (EDW.V or EDWZF) Corcoesto Gold Asset as a "strategic industrial project" crucial for economic development and numerous high paying jobs for a region hit by record unemployment.  The implications of this decision is significant as Edgewater may receive permits imminently as Galicia needs investments in the region to accelerate sooner rather than later.

As Edgewater moves closer to production and de-risks Corcoesto by receiving a permit, we could witness increased interest from the large miners looking to enter a mining supportive region similar to what we saw with European Goldfields.

Edgewater  has already received a major endorsement from the President of Galicia.  Investors can view this video discussing the project below.

In addition, Edgewater Exploration (EDW.V) recently signed a royalty on their 100% owned Corcoesto Gold Project in Northern Spain.  Essentially, this is a non-dilutive financing which was needed to publish a bankable feasibility study.

The royalty buyers go through a lengthy due diligence on the technical side to make sure this is a project that will get to production.  This agreement is a major stamp of credibility and demonstrates to the investment community that Corcoesto has a high probability to get into production by 2014 and produce gold economically.

Now that the royalty agreement has been entered into, Edgewater has $7 million in the bank which will allow them to finish the bankable feasibility study by the first quarter of next year.  We expect the fourth quarter to be very exciting for this company and believe it will be rerated as it receives permits from a supportive government who has already labeled the project "strategic".
The Minister of Economy and Industry, Javier Guerra, considers Edgewater's Corcoesto “a great opportunity, one which will create a lot of jobs.” Mr. Guerra stated “it is going to support investments which fulfill the existing legislation, ones which are safe and generate wealth and jobs”

The major miners are looking for permitted, near term gold producers in mining friendly jurisdictions who are currently undervalued by the marketplace.  The big companies have tons of cash and rapidly rising share prices and are eager to buy junior projects close to production at wholesale prices.

The Spanish Government is eager to entertain projects like Corcoesto as it will provide employment for hundreds of workers who are currently unemployed.  Spain has one of the highest unemployment rates on the continent and these kind of deals could provide jobs to a nation looking desperate for growth.

Although the company is trading at ridiculously low prices the company has transformed themselves from one of the many junior exploration companies into one of the few moving into permitting, mine development and bankable feasibility which will allow the company to finance construction.

At this point the odds are in favor of investors willing to speculate on this deeply undervalued mining company who has already attracted the participation of the supportive Spanish Government.  Financial institutions are just becoming aware of this deeply discounted project.

Recently, the company was able to sell a royalty on the project for over $5,000,000 and is now fully funded to produce a bankable feasibility study.  This is definitely a stamp of approval as the royalty purchaser goes through an extensive due diligence process to ascertain if Edgewater will go into producing gold.

In this volatile market to raise capital without diluting shareholders should be applauded and is a testimony to the quality management team. 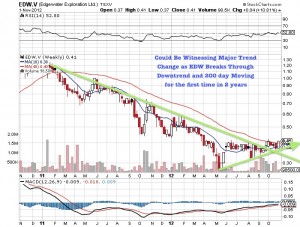 We expect a positive turn for Edgewater and subscribers may be able to purchase this security near a bottom at wholesale discounts before a possible breakout as it resumes it upward trend and gets rerated higher.  Stay tuned.

Disclosure: Author is long Edgewater and the company is featured on our free website.