This Gold and Silver Miner May Be The Next Takeout Target

In 2010, we predicted the acquisition of Fronteer Gold by Newmont Mining (NEM) for $2.3 billion dollars.  See the prediction here.

One gold and silver miner which we believe is a near term takeout target possibly before the end of 2013 is Paramount Gold and Silver (PZG).  We highlighted this company a few weeks ago and already it has made a powerful move.  The primary reasons we believe the majors are looking at Paramount is that they have known advanced NI 43-101 resources of over 100 million ounces of silver and 4 million ounces of gold at their two properties in mining friendly Nevada and the historic Sierra Madre Trend Mexico.

This is a company with a major resource base in the two most exciting mining areas in the world.  The Sleeper Project in mining friendly Nevada was a past producer and their San Miguel Project surrounds Coeur D’alene's (CDE) highly successful Palmarejo Mine in the world renowned Sierra Madre Gold-Silver Belt.

Earlier this year, Pan American Silver (PAAS) acquired Minefinders for access to their Dolores Gold and Silver Mine for $1.5 billion.  In 2010, Newmont bought out Fronteer for $2.3 billion.  Fronteer's Sandman Mine, now controlled by Newmont  is very close to Paramount's Sleeper Project.  We believe this takeout trend will continue with Paramount possibly being one of the next targets. 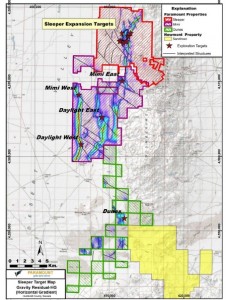 Paramount announced today that new core drilling on its 100%-owned Sleeper Gold Project in Nevada is expanding the size of the recently discovered PAD zone.  The company recently released a Preliminary Economic Assessment which demonstrated that they could produce approximately 172,000 ounces of gold annually over 17 years at a gold price below $1400.   These recent results is demonstrating that the company is continuing to improve the already profitable economics.

Paramount’s CEO Christopher Crupi commented: “With the successful completion of the Sleeper PEA, we are now working to optimize the project`s economics by adding close-in resources at a higher average grade. One core rig is focused on targets in the vicinity of the original Sleeper mine site to find satellite deposits. We also have a reverse circulation rig drilling the recently acquired MIMI claims, located south of Sleeper towards Newmont’s Sandman project, where our geologists have defined several priority targets with the potential to discover a high grade deposit similar to the original Sleeper mine.”

In addition to their exciting Nevada project, their San Miguel Project located in the Sierra Madre’s is an exciting area for the majors and Coeur has recently shown that they are looking for resource growth especially around Palmarejo as this mine is the biggest contributor of cash flow out of all their operations.  San Miguel seems an obvious target looking at their land position, especially as we see jurisdictions such as Bolivia, Argentina and Peru dealing with increased resource nationalism. 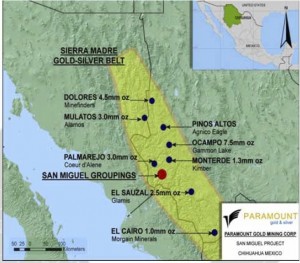 Recent drilling results at San Miguel appeared to be quite positive and a Preliminary Economic Assessment (PEA) is expected by year end.  The company has plenty of cash in its treasury of $28 million and has a strong insider and institutional base of over 35%.  There is plenty of liquidity as it trades over 150,000 shares a day. 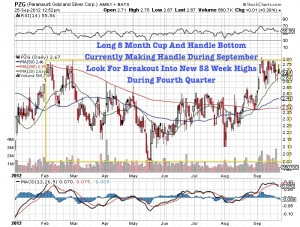 Paramount appears to be breaking out of downtrend and a base of over 18 months.  Now it has made an 8 month cup and now in September is forming the handle near 2012 highs.  The 50 and 20 day has crossed above the 200 day.  This is called a golden cross and may predict a positive move similar to late 2010 when Paramount rallied from $1.25 to $4.25.  We believe if you look at the comparables of  previous acquisitions such as Minefinders, Fronteer and AuEx that a $6 target is reasonable.

See my video interview from a few weeks ago with Paramount CEO Chris Crupi as we discuss the progress in Nevada and Mexico and why Paramount is in a strong financial position to explore and expand their already large resource base.

Make sure to subscribe to my premium service to receive reports on a timely basis by clicking here...

Disclosure: Long PZG and Paramount is a featured company on GST's Free Website