Why Cash Flow Is Crucial To Gold and Silver Mining Investors

Since July we have alerted our readers to a breakout in gold and silver prices as we expected a risk on rally in commodities with the catalyst being QE3 combined with worldwide stimulus moves from Central Bankers.   Since that time silver has soared 30% higher almost 10 straight weeks in a row as Bernanke announces a QE 3, 4, 5+...? and record low interest rates until mid 2015.

Silver has been outperforming gold over the past 10 weeks as investors are hoarding and buying poor man’s gold to hedge against worldwide quantitative easing and pump-priming being implemented by Central Banks around the world to devalue their respective currencies. 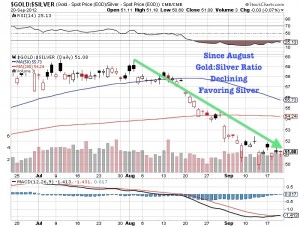 The Bank of Japan joined the Fed, ECB, China, South Korea and others by announcing an aggressive stimulus program.  This is extremely inflationary and bullish for gold and silver and bearish for the purported safe havens namely the U.S. dollar, long term treasuries, Euro, Yen and Yuan.

Remember Japan is the third largest economy in the world and they are currently facing an economic slowdown, rising electricity prices due to increase oil imports and is in the midst of a territorial dispute in the South China Seas with China.  Japan is mimicking Bernanke’s QE decision last week to attempt to devalue their currencies to boost exports.  The Japanese stimulus is massive and will now total nearly 20% of Japan’s total economy.  The U.S. dollar is falling as these drastic moves were much bigger than the consensus expected. 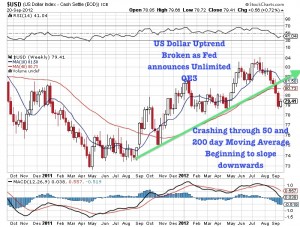 The move in silver bullion is very strong with a series of impressive moves higher.  The Asian nations are hungry for silver as investors anticipate inflation from these massive stimulus programs.  This upward move in bullion is being reflected in an emerging gold and silver producer operating right here in mining friendly Nevada.

Silver mines around the world are facing the rising threat of resource nationalism.  We only need to look at recent current events and press releases from companies operating in Bolivia, Argentina, Peru and Guatemala where plenty of silver is intended to be produced.

For many months, we have warned our readers about the rise of resource nationalism due to the local governments wanting a larger cut of the profits due to rising mineral prices.  Many mining investors have been burned by jurisdictions where dictators have taken over mines right at the point as they are on the verge of production.

For many months, we have been researching gold and silver plays in mining friendly jurisdictions such as Nevada that have both blue sky exploration potential and near term cash flow from production.  Unbeknownst to many, we have silver opportunities right here in the United States which is on the verge of profitably producing gold and silver within days.  Investors do not need to worry about mine expropriation, kidnappings or violent protests.

A few weeks ago, we highlighted Comstock Mining (LODE) as one company that should be bought before it begins producing as it may be rerated by the market shortly as it begins to generate positive cash flow.  In this difficult resource market, a small cap miner that is able to generate capital to fund further growth in the top mining jurisdiction is a real gem and attracts the large investment funds.

A company like Comstock Mining (LODE), which will be generating cash attracts attention from institutions who can only invest in miners with revenues.  It should be noted that some noteworthy funds hold and just acquired large positions in Comstock Mining such as Gabelli Funds and U.S. Global Investors as they anticipate revenues.

We believe Comstock’s positive cash flow coming from production will be able to help the company expand and explore the Comstock Lode, which is a world class, historic and prolific Bonanza grade district.

It is getting harder and more expensive to find gold and silver resources.  Comstock Mining has been able to expand their inferred resources at a cost of discovery at less than $4 an ounce.  That is truly remarkable in this current environment where miners are finding it very costly to add ounces to their resource base.

Comstock Mining just announced that its Merrill Crowe Process Facility has been fully commissioned and confirmed that the first pour is scheduled for this month.  The Merrill Crowe Plant has been significantly expanded and upgraded to be able to process ore from its Lucerne Mine and other expanded areas.  Corrado De Gasperis, President and CEO of Comstock stated, "Our team is in the process of activating the entire Dirt to Dorè system making the first gold and silver pour, our revenue stream and cash inflows imminent.  We anticipate announcing the first pour and celebrating the rich history of The Comstock with all of our stakeholders thereafter."

The Comstock Lode produced close to 200 million ounces of silver in the late 1800’s and Comstock Mining (LODE) is about to make a historic announcement producing gold and silver this month from their Lucerne Mine.

The Lucerne area now has a fully functioning processing facility and is scheduled to produce gold and silver by the end of September 2012.  The Lucerne Mine is only one out of seven major target areas.  The company has been very successful at expanding and adding ounces at very low exploration costs.  Costs of finding gold and silver worldwide have increased, however Comstock has been able to add gold resources extremely economically.

Comstock operates is Nevada which is one of the top places to mine precious metals from a permitting and cost basis.  The company is on the verge of production and generating cash flow which will attract attention from large institutions.

The strong cash flow from their fully permitted and soon to be producing Lucerne Mine will assist the company develop their Dayton Mine and other numerous target in the Comstock Mining District.  We expect the company to get rerated as a producer by institutional funds.  We believe the recent acquisition of shares by Gabelli and U.S. Global Investors may just be the beginning of major institutions becoming aware of this emerging Nevada producer.

As the gold silver market continues to move higher, we believe the company could possibly breakout at $3.20 on news of production this month and make a move to test all time highs at $4.50 made in November of 2010. 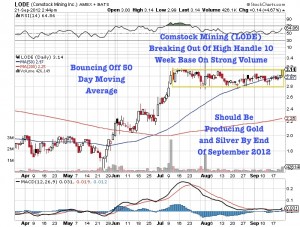 The company has recently broken out of a 18+ month consolidation on record volume from increased interest from institutions.  We expect this trend continues as it produces cash flow and earnings.  It has recently made a 10 week bullish consolidation handle which is now finding support at the rising 50 day moving average.

Comstock Mining (LODE) may be ready to make its next move to challenge all time highs and break through $3.20.  The 200 day and 50 day moving average is positive and the chart appears to be extremely bullish.

Check out my recent interview discussing this momentous time in the company’s history as it intends to be producing gold and silver  by the end of September with CEO and President of Comstock Mining (LODE), Corrado De Gasperis.