There is a titanic battle that has been mounted against nuclear energy by the proponents of coal and natural gas smearing the new nuclear reactors that are being built at this very moment all over the world, especially in the emerging European and Asian Nations.   There are big bucks involved by the forces that have chosen to tar nuclear as the result of the once in a millennium perfect storm emanating from the Post-Fukushima mindset.

It is difficult to recall if any other industry has suffered the insults arising from those forces that have it in their self interest to misrepresent with claims of "unlimited cheap natural gas, solar and wind".  They paint atomic energy with the slanted brush of distortion as if it is a kind of inverse Darwinism representing the survival of the uninformed.  Whether this media misinterpretation is intentional or just plain ignorance is debatable.  Suffice it to say, the forces of fossil fuels, solar and wind are fighting and increasingly losing battle in a book that might be entitled, “Alice In Blunderland”.

The rising power of nuclear energy (NLR) represents not only the wave of the future, but is proliferating in front of the very noses of the naysayers in nuclear.  It is as if they are caught in the time-warp of the 1970’s.  It is fossilized thinking for an increasingly fossilized sector.

We recognize that the nuclear plants built in the 1970’s are as far removed from current reality as the neanderthals are from modern man.  Attention must be paid to the resurrection and viability of nuclear plant construction, which has relegated the old nuclear mindset to the dustbins of history.

It is time for us to realize that the world has been awakening to the rise of nuclear power in the battle for energy survival.  Simply put, the current generation of atomic energy is producing modern, safe, portable and less expensive nuclear generators.

It is time to recognize that we must disenthrall ourselves from the old mindsets that are being entombed before our very eyes by contemporary visionaries who are moving full speed ahead, leaving bureaucrats and negators behind.

A few statistics are in order here, Massey Energy underwent a blow up that killed at least 29 coal miners in West Virginia.  The Mine Safety and Health Administration (MSHA) slammed coal mining with the largest fine to date for the 2007 accident that exploded as the worst U.S. mining catastrophe in forty years.

MSHA concluded that the disaster was entirely preventable.

We hardly hear about these indictments of coal in comparison to the deluge of post-Fukushima adverse publicity.  What about the Deepwater Horizon incident in the Gulf Of Mexico which killed eleven workers and sparked the worst offshore oil spill in modern history?  We witnessed internecine warfare between fossil fuel giants BP and Halliburton, blaming each other for the Deepwater Horizon disaster.

This is partial vindication of what we have been writing about for many years.  Cameco, the largest publicly owned uranium company, warns that there will be a shortfall in the availability of uranium as the world increasingly reveals the supply shortage for nuclear ore.  Companies have been frustrated raising capital for new projects.  BHP has delayed their Olympic Dam expansion and selling off uranium assets to Cameco, who is looking to double their production.

Increasingly these mining slowdowns have limited potential supply.  Add to this the ending of the Russian HEU Agreement in 2013, which will further limit uranium supplies to the United States, which happens to be the largest consumer of uranium for its nuclear reactors.

Remember Cameco backed away from the Hathor deal as Rio Tinto outbid them.  They have stated publicly that this will not deter them in their ongoing quest for producing nuclear ore right here in the United States.

Very important developments are taking place in the undervalued uranium miners.   Paladin signed a long term off-take agreement with a major utility.  The company will deliver close to 14 million pounds of uranium and will receive a cash of $200 million by January 2013.  This has major implications on this overlooked sector, which is showing signs of a positive reversal higher.  Many of our uranium selections are breaking downtrends and should see higher prices as liquidity and capital flows into this undervalued sector with excellent supply-demand fundamentals over the long term. 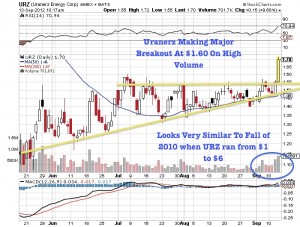 Indeed, one of our selections Uranerz (URZ) has already begun construction on its large Nichols Ranch property in the mining friendly state of Wyoming and is beginning a major breakout past $1.60.

Production is scheduled for the second half of 2012.  Cameco has announced that they will be actively searching for North American companies on the cusp of production.  Uranerz lies directly in the proximity of not only Cameco, but Uranium One as well in the Powder River Basin.  Do not forget the Russians and Asians are donning cowboy hats in Wyoming looking for their next target.

Already, Uranerz has entered into a pact with Cameco to refine Uranerz’s production at its nearby Smith Ranch right down the road.  Cameco has expressed its need for uranium ore especially out of Wyoming, where it has not met its production targets.

We believe that Uranerz can fulfill Cameco’s needs.  Cameco must act soon as there are other hungry giants in this area including Uranium One and don’t be surprised if Rio Tinto or an Asian consortium enters a bid.

A competition may arise for near term producers.  China is on record that they have every intention of becoming a major player as they focus on the new western AP-1000 technology developed by U.S. based Westinghouse in clean, economical and safer plants as opposed to the antiquated CPR-1000.  The need for uranium globally remains imperative. 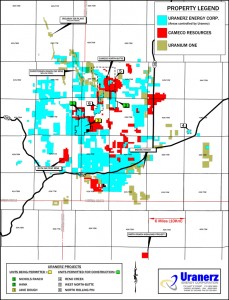 Uranerz (URZ:NYSE) satisfies these ravenous demands.  They possess impressive acreage in the Powder River Basin in Wyoming which can only add to the attractiveness to a potential suitor.

Uranerz found support along its upward three year trendline as the long term weekly chart makes a bullish reversal.  We are witnessing a pattern of higher lows as the 10 week (50 day) moving average begins to slope upward indicating that the short term trend is improving.  This may be indicating a bottoming formation similar to July of 2010 and March of 2009 when Uranerz ran from $1 a share to $6 a share.  History may not repeat, but it usually mimics.

We may witness an overload of the U.S. power system similar to what we recently saw in India.  Our power grid and infrastructure needs a major refurbishing.  Questions may be raised as to why nuclear energy has been treated by the North American Electric Reliability Corporation as an orphan child.

For the first time in American History coal capacity is being reduced.  Sooner or later, bureaucrats will awaken to the new generation of safer, cheaper and efficient nuclear which could have obviated brown outs and black outs when the lights go out as they have in the past and threaten to become prevalent in the future.

Finally, the fine hand of Iran is adding to the possibility that the price of oil may be used as a counter stratagem to destabilize the entire Middle East cauldron, as the Arab Spring morphs into the Islamist Winter.  We note the recent attacks on our U.S. embassies in Cairo and Benghazi, on the anniversary of 9/11, which resulted in the death of Americans, a U.S. Ambassador and the tearing down of the U.S. flags which were replaced with Al Qaeda emblems.

Should this continue to occur across the Middle East then there may well be a spike in all forms of energy, especially uranium which is selling at a fraction from its peak in 2007.  If Iran mounts a Middle East counter-offensive and possibly chokes off the Straits of Hormuz, perdition may break loose as all commodities may spike putting urgent strains on an already weak Western economy.

This may be the reason why Saudi Arabia and the United Arab Emirates are going full speed ahead in constructing nuclear reactors to counteract the inaction of the world which is allowing Iran to move full speed ahead.   Stay tuned as I will be publishing an update on gold, silver and the miners which appear to be making key long term breakouts as we write.