Investors Preparing For QE3 As Gold and Silver Skyrocket

Silver (SLV) is breaking out past $30 and the trend is moving higher as the Fed signals that they are now ready to pull the trigger and boost the economy possibly as early as the next Open Market Meeting in the middle of September.  Silver is regaining the 200 day moving average on a breathtaking move.  Even though we have the general equity markets at record highs, economic conditions all around the world are not showing evidence of a recovery...yet.

The equity markets (SPY) rallying higher during an economic contraction may be forecasting a reflationary turnaround.  Remember a rising equity and bond market historically precedes an inflationary scenario.

Silver which was by far the most receptive to QE2 broke out earlier this week and is continuing higher breaking resistance and downtrends.  Learning from the silver price move after QE2, our readers have been informed for many weeks that we would believe the $26 area would hold and we would see an upside reversal breakout above $30.

This technical breakout has occurred and is very bullish.  Now it hits the newswires that Bernanke may discuss a new large scale asset purchase program (QE3).  Many who sold their precious metals and mining stocks hoping to get in at lower  prices are now scrambling to buy back in at higher prices.  Thus we see a parabolic move in precious metals.  However, the major miners (GDX) and the small explorers (GDXJ) are just beginning to make major breakout.

We have maintained the motto of patience and fortitude as other respected analysts abandoned the precious metals ship.  We witnessed over the past few weeks a major transition of gold, silver and mining stocks from weak hands to strong hands.

Gold (GLD) is now at a 6 month high as the mainstream begins to realize that the Fed will announce something big.  The Fed needs to bring down unemployment before the elections in order to keep their own jobs.

As we have been saying for many weeks QE3 is closer than most expected and that The Fed must do whatever it can to devalue the dollar to pay down soaring debts.  This is extremely bullish for our precious metals and mining stock selections.

The Fed may follow China and other countries around the globe in making accommodative moves.  This summer China began cutting interest rates for the first time in years.  Do not forget two years ago at the end of August, Bernanke announced QE2, flooding the markets with $600 billion.  Silver soared from $18 to $50.  It seems that investors have already prepared for such a move as gold and silver stage technical breakouts, while the miners are just beginning to play catch up.

One gold and silver miner which we believe is a near term takeout target is Paramount Gold and Silver (PZG).  The primary reasons we believe the majors are looking at Paramount is that they have known advanced NI 43-101 resources of over 100 million ounces of silver and 4 million ounces of gold at their two properties in Nevada and Mexico.

This week they announced an updated resource estimate which showed exceptional growth at their San Miguel Property in Mexico which borders Coeur's highest cash flowing mine Palmarejo.  The new estimate shows the investment world that Paramount now has the size and grade to be financed and move toward production.  The CEO Chris Crupi noted, "The nearest equivalent property from a geological perspective is the Palmarejo Mine right next door which is owned by Coeur d'Alene Mines. It is worth noting that when the decision was made to capitalize that mine, its resources looked very similar to the San Miguel of today." 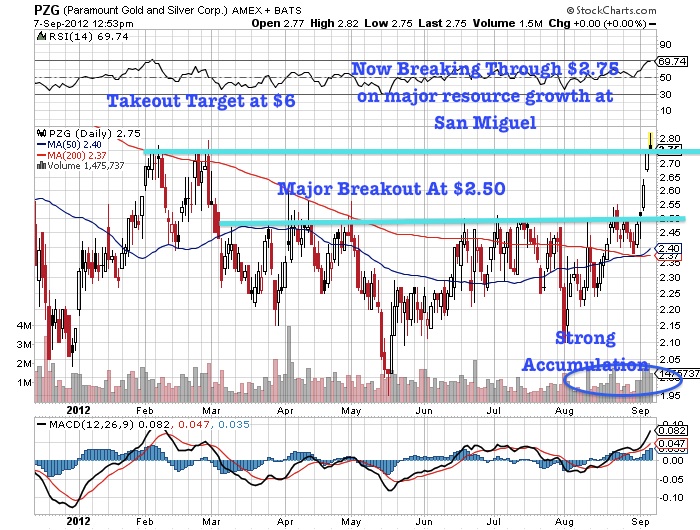 Paramount is breaking through resistance at $2.50 and $2.75 on strong accumulation.  We believe Paramount is a takeout target with a price objective of $6.