The Chinese ideograph for crisis is represented by the sign for danger joined together with the symbol for opportunity.

Admittedly, for over a year and a half precious metals investors have been going through a time for testing of our essential position in wealth in the earth equities and bullion.  Investors were experiencing pain and panic at a time that it was easier to throw in the towel as the technical charts appeared to be broken as gold (GLD) and silver (SLV) went below the 200 day moving average.  We advised patience and fortitude despite an onslaught from fellow analysts and media coverage which were attempting to shake out our readers.  Now precious metals and miners appear to be making constructive and powerful breakouts.

The casino has ever been thus as the House skillfully confuses, obfuscates and discourages the majority of the players who go home with empty pockets in order that the small minority of the speculators ride home in the limousines.  Market makers look at the same charts that we do and use them as contrary indicators.  Many were faked out of their precious metals  and mining equities (GDX) and finding it difficult to get back into them as Bernanke signals risk on at Jackson Hole.  Further QE’s are only weeks away and as we have always said that it is better to be months early then days late and called the recent silver breakout to the day.  Click here to see article.

This is exactly what was happening over the past 18 months.  Charts appeared to be broken and tried to fake us out of our long term plan.  The shorts were taking advantage of what is the summer goldrums, thinly traded period at a time when major players are out of town on there summer holidays.  The volume was low at a fertile time during which the all important bases were being established for eventual lift-offs and the reformation of new charts.  Breakouts are occurring all over the place and the junior market (GDXJ) is beginning to attract major institutional interest as many of the miners regain their 200 day moving averages and long term uptrends. 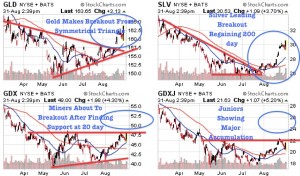 Remember, that we have said for many months, the long range technical picture of the upward trajectory of wealth in the earth equities is still intact and needed a healthy period of rest and rehabilitation in this ongoing long term upward cycle.

Some critics and famous pundits were charging that this ascent from $278 to $1900 was a bubble.  We informed our readers that they are wrong.  This diagnosis would fly in the face of classical metrics in other historic manias and delusions.  The underlying metrics that constitute other blow-offs are not present at this time.  Instead, we are deluged by worldwide instabilities, financial quicksands and unsustainable sovereign debt and today’s announcement confirming the reemergence of QE3.

We are just breaking out at a time when public sentiment was negative and the majority of precious metal assets are still selling at fractions of their true value.  In a true bubble, mining equities would be selling at multiples of their true value.  Instead, they currently represent bargain purchases, which continue to be bought by major players placing large bets on the long term upward trend in our chosen sectors of gold, silver, uranium (URA) and rare earths (REMX).  We may be in the early stages of a major move in precious metals which could be jaw-dropping.  When the taxicab driver starts talking about junior mining stocks then we will know that we are near a top.  We are not even close.  Most investors are unaware of the potential upside in the junior mining market.

Covertly and without much media coverage, China continues to purchase undervalued natural resource assets such as CNOOC’s (CEO) deal with Nexen (NXY).  Rio Tinto (RIO) outbid Cameco (CCJ)for the purchase of Hathor’s Roughrider Uranium Deposit.  Paladin signed a major deal with utilities.  In the rare earth arena, China is looking to import heavy rare earths which could cause a major supply shortage.  The list goes on and on.

The meaning of all this activity to us is that this 18 month correction in precious metals and mining equities while striking fear among discouraged players was precisely a time not to panic.  The more sophisticated buyers such as us were taking advantage of the situation to hold on and indeed add to positions.

This is not bubble time, indeed it is basing and breakout time from which powerful up-moves characteristically occur.  In fact, precious metals and miners were outrageously oversold and represented a coiled spring positioning to be released.

There may be additional short covering for the period immediately ahead.  The short position on miners is still large especially in the rare earths and uranium miners.  The consensus shorting gold called for further declines to the $1300 area, yet we believed a reversal would occur sooner rather than later as conditions are already so oversold.  We suspected that these projections were overblown to the downside.  Of course, since when have the markets promised us easy streets.  Nevertheless, the payoffs were worth the wait as many who sold are having a difficult time reentering as the market begins to make impressive moves.

The difficult question for may be raised as to the time of new entries into the precious metals cycle.  We expect an exciting second half of 2012 with explosive moves similar to what we saw in early 2009.  The bearish sentiment and oversold conditions in precious metals and mining equities have been the major ingredients for the powerful reversal we called to the day.  One who is late to the game must begin looking for pullbacks to support areas which we constantly monitor in our free service.

Don't miss out on this exciting time as we are about to publish an update on small cap silver opportunities managed by quality people in North America.

Receive my premium service free for one month by clicking here...