We may be witnessing the beginning of a major move in the price of silver.  Supply comes mostly from Peru and Mexico where violence is increasing.   Newmont is having to deal with violent protests in Peru, Excellon and Fortuna in Mexico.  Right now, Pan American Silver is suspending investment in its flagship Navidad Project due to the rising resource nationalism in Argentina. 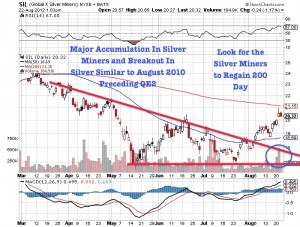 Bolivia and Evo Morales may be nationalizing South American Silver’s (SAC.TO) deposit.  The company describes it as "one of the world's largest undeveloped silver deposits."  Tahoe Resources large silver deposit in Guatemala is being threatened by nationalism.

This violence and rise of resource nationalism is impacting silver supply over the long term.  Before it becomes common knowledge about the coming shortfall in silver, our readers must be two steps ahead and look for quality, early stage silver explorers in mining friendly jurisdictions.  Silver has held $26 and is now breaking out of a long base.  The early stage silver miners may be ready for takeoff.

Enter center stage Rainbow Resources (RBW.V) who is about to commence drilling on the High Grade Silver, Near Surface International Project.  Rainbow acquired three high grade, past producers in the West Kootenay region of British Columbia that was never previously drilled. 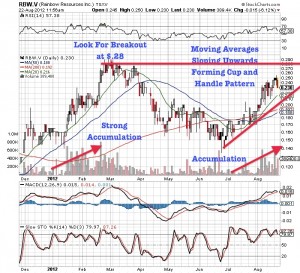 Look at the high volume accumulation that has been going on in early August.  The price has risen above the rising 50 and 200 day moving significantly, outperforming their peers.  Investors are excited about the upcoming drilling program beginning this weekend. 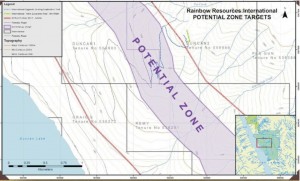 Recently the company released airborne geophysical data that shows a much larger zone of silver mineralization at their International Property.  The company has a high grade shallow target which will be the focus for drillers this weekend.

This project has been around for a long time as high grade silver was found on it in the early 1900's.  Now with the price of silver about to break out investors are looking for early stage, emerging high grade discoveries located in mining friendly jurisdictions.

The International Property has shown extremely rich silver samples of 30+ ounces per ton and up to 70% lead.  British Columbia has a well established mining industry and are supportive of exploration and mine development.

In addition to the International Property, the company has picked up the Jewel Ridge Project whic 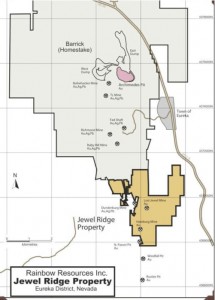 h is adjacent to Barrick's Ruby Hill Project.  Ruby Hill is an open-pit, heap leach operation. In 2011, Ruby Hill produced 127,000 ounces of gold at total cash costs of $334 per ounce1.  The company believes that there is gold on the property directly to the south and plans to go down in the fall after work is completed in British Columbia.

In addition to gold and silver exploration, Rainbow Resources picked up concessions surrounding Eagle Graphite, which may be the only producing graphite mine in Western North America. 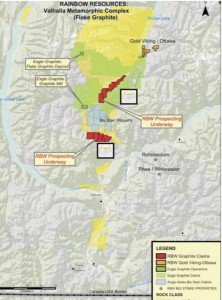 The company has an experienced board with strong shareholders.  The share structure is impressive with approximately 35 million shares outstanding, with insiders owning approximately 22%.

Check out my recent interview with Rainbow Director and Qualified Technical Person Jim Decker discussing the beginning of drilling on the International Property.

Not only has Mr. Decker who is a Rainbow director and the companies qualified person under NI 43-101 been an experienced trainer in mine supervision for such companies as Alamos Gold, Barrick, Breakwater, BHP, Cameco, Capstone Mining, Cleveland Cliffs, Farallon Mining, Fording, Kinross, Newmont, North American Palladium, Placer Dome, Prodeco, Suncor, Teck, Western Coal and Xstrata but some of you may have known him as President and Founder of Grande Cache Coal.  Grande Cache was eventually acquired by China's Winsway Coking Coal Holdings Ltd. and Japan's Marubeni Corp. for $1 billion.