Look For The Silver Lining: Silver Swan Ready For Takeoff

An old melody advises us to look for the silver lining whenever dark clouds appear in the blue.  There is economic and political upheaval all over the world, especially in the South China Seas.  This may directly affect the world's supply of industrial metals such as graphite, rare earths, molybdenum and tungsten.

Today we direct our attention to an area where silver is shining.  Poor man’s gold may come into prominence shortly and provide our subscribers with possible profits.

The silver battlefield is filled with bulls and bears fighting for dominance.  Recently, the poor man’s gold has dropped to the $26 area.  The struggle continues between the opposing sides.  The bulls and bears are keeping their eye on this critical support level at 2011 lows.

We sense that the bulls will prevail at this mark.  The reasons to buy silver now is compelling.  The U.S. dollar may have already reached an interim top as investors realize that the employment situation in the U.S. is still a concern and that the Federal Reserve will need to implement some form of QE3 to devalue the dollar to pay off soaring deficits and promote inflation possibly announced at the end of this month in Jackson Hole.

The bears disagree and claim that silver will be pushed back beneath this level as silver plunges to new lows as the Fed continues to keep its trigger off of the QE3 bazooka and wait until after the election.  Silver is holding the line making a rounded bottom.  Notice the rounding bottom signaling a potential breakout as sellers become exhausted. 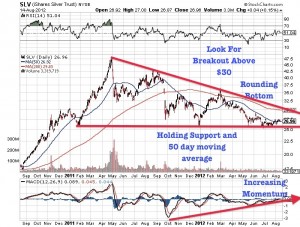 On the supply side, silver production comes mainly from Peru and Mexico where miners are facing significant challenges including violence.  Newmont is having to deal with violent protests in Peru which reminds us of what Fortuna Silver had to deal with in Mexico.  Right now, Pan American Silver is suspending investment in its flagship Navidad Project due to the rising resource nationalism in Argentina.  Pan American paid $500 million for the asset in 2009.  This project may be the richest undeveloped silver deposit in the world.

Similarly, Bolivia and Evo Morales is considering nationalizing South American Silver’s(SAC.TO) large undeveloped silver project amidst violent indigenous protests.  The company describes it as "one of the world's largest undeveloped silver deposits."  The company is planning to invest over $50 million into the project.  At the same time the Bolivian peasants have violently kidnapped five workers from the project.

Such turmoil in Peru, Mexico, Argentina and Bolivia may add to the world’s already existing shortage of silver.  This supply crunch is combined with rising political uncertainty in Egypt, Syria and Iran and economic malaise in the EU and the United States which is causing investment demand for silver to rise exponentially.

All signs are pointing to a possible global inflation which could propel silver prices higher.  We have record deficits in the U.S. where many citizens are looking to protect their savings from a potential devaluation to pay down record debts.  With the recent Obamacare Supreme Court Ruling entitlement spending will soar.

Former Federal Reserve Chairman, Alan Greenspan noted in 2010 that "Only politically toxic cuts or rationing of medical care, a marked rise in the eligible age for health and retirement benefits...or significant inflation... can close the deficit."

Remember, in response to Keynesian pump-priming inflation threatens to make silver increasingly attractive as a safe haven.  There is always the presence of increased industrial demand for the poor man’s gold.  Silver is being used increasingly in high tech applications from batteries to solar panels.

Last month the silver etf’s added 293 metric tons of this valuable metal to their holdings which represents their highest inflows since September.  The bears claim that silver’s proximity to the $26 line is a negative signal and are pushing below their 50 and 200 day moving averages on the way to $18.

Recall that silver is volatile and moves up or down more than other commodities such as gold.  On the other hand, QE3 if it is implemented will encourage monetary easing internationally and thus will boost silver prices.

Silver soared from $18 to close to $50 outpacing other commodities.  If QE3 is carried out, silver could experience a similar type of move.  In such an event, the specter of inflation may trigger silver’s rapid ascent into new all time highs.  We regard silver as a long term holding which may be ready to move into new all time highs past $50 depending in part on the Fed’s next move.

Subscribe to my free 30 day trial to discover some interesting early stage-silver opportunities in mining friendly Nevada and British Columbia by clicking here...