The gold mining stocks have recently underperformed the overall equity market since the ending of QE2 in 2011 and the introduction of Operation Twist. Since the 2008 credit crisis, one company New Gold has delivered on its stated promises and has rewarded original GST subscribers of more than a 1,000% gain since highlighting it in May of 2009 outperforming the gold mining index and gold bullion by a wide margin.

See our original alert on NGD from 2009.

In an exclusive interview with Randall Oliphant, Executive Chairman of New Gold (NGD), we discuss why the company has outperformed its peers and why it has one of the best resource growth profiles in the business with El Morro, New Afton and their recently acquired Blackwater Project in British Colombia where they just announced a measured and indicated resource of 7.1 million ounces of gold up 30%.  In addition, the company met its June 2012 target of commencing production at its New Afton Mine in British Columbia.  Finally, the Ontario Superior Court has ruled in favor of New Gold and Goldcorp continuing its partnership on one of the best undeveloped gold/copper projects in the world El Morro in Chile.  New Gold owns 30% and is in a great position to benefit from this mine which is fully funded by their other cash flow positive operations.  Management has consistently delivered on stated goals.  As the majors deal with declining production and reserves New Gold may be an ideal takeover target with its excellent portfolio of growing assets.

"We are pleased that the Court's decision affirms our position that we validly exercised our right of first refusal," stated Randall Oliphant, Executive Chairman. "El Morro's significant gold and copper mineral resources, continued exploration potential and strategic location make it one of the best undeveloped projects in our industry. As it was our company that originally discovered El Morro, we believe we are in a great position with a significant, fully funded interest in this world class project."

New Gold's 30% share is expected to be over 90,000 ounces of and 85 million pounds of copper per year over an initial 17 year mine life with life of mine cash costs of $700 per ounce gold.

See the interview with Executive Chairman Randall Oliphant below:

New Gold is testing resistance and the 200 day moving average at $10.25.  It appears to be forming a reverse head and shoulder pattern after declining 50% from its all time high.  Look for New Gold to break its downtrend and regain its long term  uptrend from 2009. 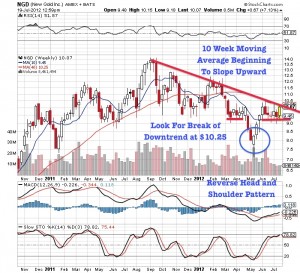 Make sure to sign up for my premium trial as we begin a new bull market in precious metals, uranium, rare earths and graphite.  Gut wrenching hyper-inflation is about to begin.