Edgewater Exploration (EDW.V) just recently announced an official arrangement with Kinross on a joint venture on the Enchi Project in Ghana where it was just announced the first NI 43-101 resource estimate containing 750,000 ounces of gold on the project which was above the company's stated expectations. Enchi appears to be an early stage Chirano Mine which is operated by Kinross and measures about 5 million ounces of gold. Edgewater and Kinross are about to spend $2 million on Enchi to step out drilling to hopefully increase the resource at Enchi. Ghana is an excellent place to operate and explore. 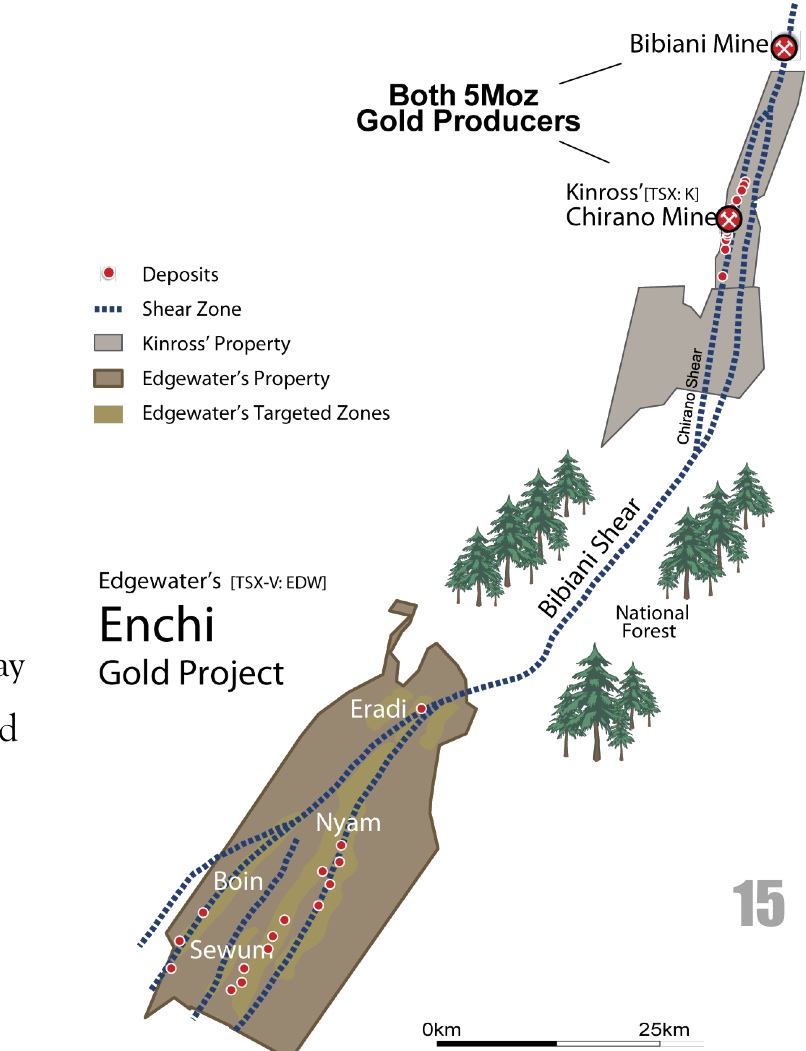 Their flagship project in Spain, Corcoesto, is returning better than expected in fill drilling results. Management just returned from Spain where the country is very keen to resolve unemployment issues where around the mine unemployment is soaring. The Spanish Government is quite supportive to promote jobs and revenues to the local community.

President and CEO George Salamis stated, "I am very pleased with the support and attention the Corcoesto Gold Project has been getting from all levels of government and the surrounding local communities. Edgewater continues to work with all the communities, stakeholders and government to adhere to the highest socioeconomic and environmental standards. Our public consultation has been going on now for some time; we are firmly committed to seeing Corcoesto come to fruition and ensure surrounding communities derive the maximum benefits."

Edgewater Exploration (EDW.V) recently announced a deal with two major banks to finance Edgewater’s 100% owned Corcoesto Gold Project.  Credit Suisse and Barclay Bank may provide $120 million for the rapid development of this asset after having done intensive due diligence on the viability of this project.

It is Edgewater’s intent to produce a bankable feasibility by the end of 2012.  George Salamis, President and CEO of Edgewater states,

“...We believe that the bank's involvement in the financing of Corcoesto, is a testament to the project's future ability to produce gold at a reasonable cost and return, in addition to the local support for the project demonstrated at the ground level in Galicia, Spain."

It should be noted that major banks are well aware that Northern Spain is extremely supportive of mining development. 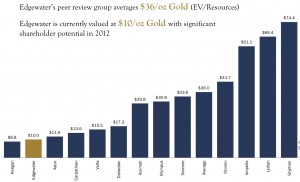 Edgewater is deeply undervalued at under $10 per ounce of gold.  This is significantly below its industry peers. 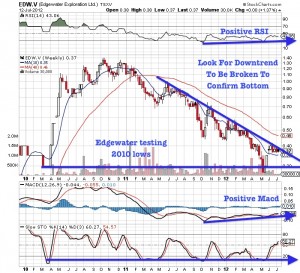 Despite significant progress in both Ghana and Spain, the company is trading at 2010 lows.  The technicals are showing the potential for a major bottom which would be confirmed when the downtrend is broken.

Disclosure: Long EDW and EDW is a featured company on Gold Stock Trades.