We have climbed the wall of worry for over twenty years as wealth in the ground becomes increasingly desirable in a world that is threatened with the ghosts of depressions past.  We observe the doubters who regale us with such headlines as “The Fed’s Big Move Is No Solution” or a noted economist writes that he senses the tone of urgency of Fed Governor Janet Yellen’s remarks that “the scope remains to provide additional accommodation.”  Yellen’s comments are really repetitions of her boss The Fed Chairman Ben Bernanke.

The world is navigating very troubled waters.  For over four years the top Central Banks orchestrated by the Federal Reserve Chief injected a flood of trillions of dollars into an ailing financial system.  The result has been extremely volatile upswings as QE1 and QE2 were introduced and gut wrenching declines after QE2 expired.  The Venture Exchange has been in a decline since the middle of 2011, while banks have been propped up by an accommodative Fed.  This is what they call an economic recovery?

Gold and silver are building bases, while mining equities are reflecting valuations priced in for a pandemic meltdown.  The banks and large resource companies are sitting on cash and treasuries as the media ushers the investment herd from Euros to Dollars.  We can look from old posts from 2009 where  the opposite occurred and Europe appeared stronger than the United States.  The reality is that the main problem is not European Debt, but U.S. debt.   A rising trend in value of the U.S. dollar and long term treasuries has been extremely deflationary, but will not last forever.  Eventually, the U.S. must devalue the dollar in order to pay off soaring debts.  Obamacare is another example of policies which could severely increase our national debt and cause us to possibly default like Greece.

Precious metals, uranium and rare earths appear to be testing key support levels, which should hold.  We are forecasting a reversal of the 2011 downtrend in the second half of 2012-2013.   We expect China to continue to squeeze the West and a renewed interest from investors and end users to participate in the rare earth sector which will once again hit the mainstream.

Rio Tinto outbidding Cameco for Hathor indicates the bargain basement prices many of Hathor’s uranium peers are currently being valued.  We expect continued excitement in the vital nuclear sector worldwide.

We may see continued lateral movement due to us being in the summer doldrums before the markets challenge and breaks through old highs.   We are also witnessing support levels still holding indicating that despite all the doom and gloom the markets are improving.  Listen to what the markets are telling us, not what the media is reporting.

Now we hear the voices of the Cassandra’s and the prophets of doom as they inform us that a rally in precious metals and miners is devoid of lasting power.  We disagree.   The mining sectors and natural resources are in a period of rest now preparing for a new launch as investors realize that the U.S. dollar is far from a safe haven.  The underlying quandary in still in need of repair.  For now we are in the quiet summer doldrums.  The economic cancer continues to metastasize albeit out of sight and out of mind.  Come this Fall and Winter our sectors in precious metals, uranium, rare earths and graphite should shine as wealth in the earth is realized as a true hedge against hyper-inflation which is preceded by this current deflation.  Remember that during the 1920’s the U.S. dollar rose against other currencies.  After the crash, the dollar still maintained its value as investors who were on margin had to raise cash.  After all of the de-leveraging was finished and the herd entered the dollar, FDR devalued the U.S. dollar and raised the gold price from $20 an ounce to $35 practically overnight. All private ownership of gold became illegal.  This history lesson teaches that rallies in the dollar during deflations are often followed by gut wrenching hyper-inflationary environments. 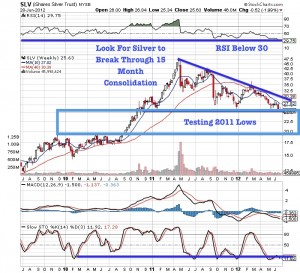 Silver is testing 2011 lows and is extremely oversold with an RSI reading below 30.  We believe silver could rebound off of these extreme oversold levels and possibly break resistance to the upside.

Rising precious metals markets love climbing walls of worry which are in this case spreading malignantly.  We do not enjoy being a harbinger of sad tidings.  However, the Fed and its European acolytes have failed to address the real issue of the malaise in which the world finds itself.  Specifically, the cancer consists of too much reckless spending and dependance on governments whom one suspects doesn’t really know what is going on.  Watch gold and silver as it finds support at key levels.

The elites of the west possess all they need for the wives, children and grandchildren to live in splendor.  They are trying to solve fiscal malignancies with financial dollars.  Our leaders are addressing the debt problem with financial band-aids.  This is a perilous Keynesian experiment, which has long ago been disproven, but which arises every time capitalism reaches for a solution and comes up with the old pump-priming.

Over a century ago another failed economist wrote that a specter is haunting the Western World.  In some respects, the French have a saying that, “the more things change, the more they remain the same”.

Who could’ve dreamt that in 2011, we would see demonstrations in the Tahir Squares of the World that would result in Egypt coming under the control of the Islamists.  Perhaps the past is prologue and we are destined to witness the same old scenes of revolt in other countries as well.  The masses are not stupid.  Everyone has a smart phone with plenty of rare earths, lithium and graphite in it.  They all want the good things of life for their families.

In any event, we are reaching a societal point of no return where entitlements such as Obamacare can no longer be afforded.  They think we can make everything right by monetizing the debt which is only months away possibly after the election.

In conclusion, what does all this mean?  As time goes by the only true repositories of wealth exists in the natural resource area as it has since the days of Athens and Rome.  Oddly enough after millennia we have come full circle, the same countries are going broke.  History may not repeat, but it recurs and mimics.  Be careful of the coming debasement of the dollar and hold on to your precious metals and wealth in the earth.  Monitor for a reversal off of these oversold levels at $26 on silver and $1550 gold.