Gold, Silver and The Miners Bottoming While Facebook Is Busting

We are witnessing a few cautionary signs that indicate a radically overbought U.S. equity and bond market.  Stealthily, the precious metals, and mining equities are bottoming.  The strong uptrend in the equity markets since October of 2011 has caused many investors to join the herd in the latest investment fad entitled, “Social Media”.

Take a look at Groupon, Zynga, LinkedIn, etc.  Their vogue will not last forever.  Sentiment for the social media sector may be reaching an euphoric extreme, while the mining stocks have fallen into public disfavor.  The miners are bottoming at historic low valuations while the initial public offering of Facebook is valued at 100 times trailing earnings.  This is an abiding concern of Gold Stock Trades.

This eerily reminds us of the dot-com bubble in 2000.  Recall a company such as “theglobe.com” which made the largest gain in history on the day of its IPO only to be bankrupt two years later.  The CEO was also in his twenties.  The brokers were able to find myriads of buyers beating at their gates.  As the French say, “The more things change, the more they remain the same.”

Fast forward twelve years later and so many lemmings are buying Facebook stock that the marketers happily sold an additional 25% more than originally planned.  Rarely has an IPO gotten such a cascade of hype and busted.  My gut tells me something may be amiss.  When the butcher, baker and the candle stick maker are trying to get in on the Facebook underwriting, it brings to mind Jesse Livermore’s warning that when masses clamor for initial public offerings, red lights are flashing along the investment highway.  Meanwhile as Facebook becomes public, insiders sell and buy the undervalued gold miners.

There is a growing body of evidence that gold has formed a potential double bottom around $1525.  This area in the low $1500’s represents a strong area of support.  There seems to be plenty of buyers on the sidelines as we have witnessed 3 bullish high volume reversals in the miners in the past two weeks.  Our charts may indicate strong accumulation during this bottoming process which represents the transfer of weak hands into strong hands.  Frequently, the bottoming process is accompanied with bearish sentiment as it is now.  When the analysts are universally negative, we are alerted to a potential major turning point.  Silver (SLV) is also showing major support at $27.50.  The average middle class European is converting their Euros into physical gold and silver as fears are rising of a major devaluation in the Euro to pay back the soaring debts of Greece, Italy, Spain and Portugal. 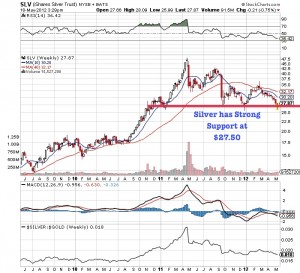