Gold Stock Trades (GST) has been in the vanguard in affirming that uranium stocks are undervalued.  They had been pummeled unfairly.  Using a boxing metaphor, when Fukushima was sending them to the mat they should’ve been down for the count.  Instead, GST refused to succumb to the uppercuts of pessimism that were battering even the champions in the sector.

When it was not fashionable to advocate uranium miners, GST recognized that nuclear power remains a viable contributor to inexpensive electrical energy vital to the needs of not only major industrial nations, but to developing countries throughout the world.  GST continues to see the powerful resurrection of the entire nuclear energy sector.

In a current report, The International Energy Agency (IEA) stated that nuclear power remains the indispensable factor in the global energy grid.  Moreover, there needs to be a new mindset of how nuclear energy is perceived.

The “Fukushima Fever” is abating and it is time for the world to realize that the outmoded concepts of the 1970’s have gone the way of the dinosaurs.  Instead, little mention is made of the new generation of safer, smaller, portable and inexpensive nuclear reactors, which are being built at this very moment throughout the world.

There are 439 operating reactors and 63 currently under construction, many of which are the new breed.  Much of the demand emanates from China, India, Russia and strikingly the United States, home to a powerful environmental movement.

Increase In Air Pollution And Demand For Oil

Increasingly, the scientific community is already aware that Germany and Japan are witnessing increases in air pollution and carbon emissions generated by their diminished use of nuclear power.  Additionally, the price of oil continues to rise as tensions in the Middle East escalate.  Syria has turned into a fiasco while Iran continues to make advancements on nuclear bomb making capability.  All this makes nuclear a cleaner and more affordable option.

We have recently written about the simmering cauldron in the Middle East.  The Iranian-Israeli confrontation looms increasingly.  A sudden spike in the price of oil remains on the table.  Such an eruption and a possible closure of the Straits of Hormuz would strengthen the case for dependable nuclear energy.

There are many factors that are already impacting the all important supply-demand ratio for uranium.

Already supply is outstripping the rising demand of uranium with a deficit to be expected in 2013-14.  This is despite the Fukushima panic and the resultant negative news.  Add to this the ending of the Megatons to Megawatts Program between the United States and Russia whereby Russian nuclear warheads were being furnished for U.S. nuclear energy production.  At present this is providing half of all U.S. nuclear needs.  By 2013 this program will be phased out, thereby increasing the need for uranium miners to fill this gap.  Presently, domestic uranium miners are supplying less that 4% of U.S. demand.  Utilities will become increasingly dependent on these emerging uranium producers to make up for the shortfall.

Recent news substantiates the long standing support of uranium  selections by Gold Stock Trades.   Hathor reached new heights and erupted into a bidding war between Cameco and Rio Tinto.   Cameco offered $4.50 a share, triple the price Hathor was after Fukushima.  That was not enough as Rio Tinto outbid Cameco.  This should serve as a strong signal to investors seeking a growth sector that is significantly undervalued and under-loved.  Remember Hathor will not becoming into production for several years.  It is not even in pre-feasibility and yet the mining giants are locking horns to guarantee supply past 2018.  This excitement will grow to envelope other uranium miners, particular those on our select list.    We are witnessing the most buying in Uranium Participation Corp since the Fukushima Disaster. 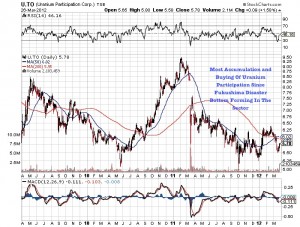 To discover these beaten down nuggets, we use our proprietary “PPT” (Place, Price, Time) method of analysis to identify miners that may attract significant investment interest.  One of these companies that should eventually attract these searching eyes of the hungry majors.  Rio Tinto’s first move after the Credit Crisis of 2008 was to deploy their cash for Hathor.  There should be others as this is just the beginning of the uranium feeding frenzy.

Uranerz Next Possible Target of Majors

Uranerz Energy (URZ: TSX and NYSE) meets the requisites of PPT analysis.  They are in the right place, the right price at the right time.  Critics may be put off by the low price of URZ.  Always remember that Apple, Microsoft, Cisco, Barrick and Goldcorp were all penny stocks and certainly under $1.  We are in search for geometric, multiple rewards.  There is always one proviso: patience and fortitude are requisites in order to reap the subsequent rewards.  It would be no surprise to see a handsome payoff for the following reasons.

Uranerz has a cash position of $38 million.  It should also be noted in addition to their cash reserves, they have signed contracts with two major utility companies in the United States, including the giant Exelon and a processing agreement with the largest uranium miner in the world and Powder River Basin neighbor Cameco.  This capital is allocated for the development of a profitable mine at the Nichols Ranch In-Situ Recovery (ISR) Uranium Project.  These monies are additionally being used on continuing exploration in the fertile Powder River Basin as the company is on record saying that production will begin in the second half of 2012.

A word for In-Situ Recovery.  This may well be Uranerz’s ace cards.  It is a low cost process with which environmentalists have little cavil as it is an environmentally friendly process with no waste rock and no tailings pond.  Moreover, it involves lower labor costs and a smaller workforce.  It is profitable even on lower grade uranium deposits. They have hired additional staff to expedite the Nichols Ranch Project.  A map of their properties in Wyoming, indicate that they are directly in the middle of such Goliaths as Cameco and Uranium One.  Moreover, they are in a friendly, mining jurisdiction right here in the United State in beneficent Wyoming, immunized from resource nationalism that is sweeping nations throughout the world. 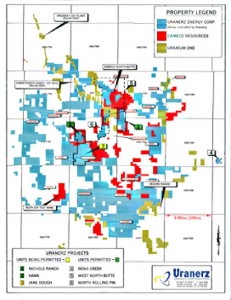 Uranerz’s management is the perfect combination of experience and know-how.  As if the Nichols Ranch, which is on the cusp of productivity barely 6 months into 2012 were not enough, they intend to use this project to serve as a springboard to develop other Powder River Basin projects specifically the Hank project which is already permitted and Jane Dough which is well on the way.

Looking at the map we notice a plethora of other units that are about to begin permitting.  Subsequent development of other projects should undergo an accelerated permitting process through the standard permit amendment provisions of the bureaucratic regulatory process.  An examination of the above map makes Uranerz an irresistible candidate for investment monies.

From a technical perspective, the long range point and figure chart on Uranerz reveals a pattern of rising bottoms in the maturation process of wealth in the ground resources.  Add to this a developing reverse head and shoulders pattern is taking place before our very eyes.  The 50 day moving average has been penetrated to the upside after reaching long term trend support.  This indicates that the bottoming process may be completing as the 50 day has crossed above the 200 day.  We have witness a short term pullback as it forms the right shoulder above the 200 day moving average and is now poised to breakout.  The past six months has been excellent for Uranerz as it has more than doubled in value and has outperformed the general equity market since our October 4th buy signal.  Its entitled to this current pause before a breakout from this pattern, which gives us a short term target of $3.25 and a long term target of $7.

There is one proviso that must be added to this study.  Patience and fortitude are de rigueur.  Remember the previous references to such illustrious money makers as Goldcorp, Barrick and Apple are applicable to Uranerz.  The eventual profits will be well worth the wait.  It is rare to find a stock that is selling at the $2 mark with so many attractive aspects.

To reiterate the long term search for nuclear energy is on the rise.  Demand for uranium is growing far in excess of available supply.  Uranerz is the best of breed of near term U.S. uranium producers with significant upside potential.

Disclosure: Long URZ and URZ is a featured company on http://goldstocktrades.com