Despite the Fukushima setback of last March, nuclear power is not a dinosaur industry of the past, according to Jeb Handwerger, editor of Gold Stock Trades. In fact, he believes the world is reawakening to the need for nuclear power generation, which demands increasing amounts of uranium. The big-percentage returns on uranium will come from the near term U.S. domestic producers and junior exploration companies in the Athabasca Basin, and in this exclusive interview with The Energy Report, Handwerger shares his favorite names that could return huge multiples.

The Energy Report: I can see from your newsletter that you are bullish on uranium. Can you explain why?

Jeb Handwerger: The worldwide demand for electrical power is giving rise to a nuclear renaissance. Even before the events in Japan in March 2011 there was renewed interest. In some ways, the disaster at Fukishima can benefit the sector by pushing us into the modern age of nuclear, which is safer, cleaner, smaller and in some cases portable. We are really at the cusp of a nuclear revival, and I think it is going to be stronger than ever. The West and especially North America have the ability over the next few years to become not only energy independent, but to become suppliers and exporters of energy. Regardless of public opinion on this energy source, nuclear power is not going away. Countries are going to have to learn how to live with and use nuclear power in a safer and more efficient way.

TER: What are the catalysts you're seeing in the sector?

JH: There are so many catalysts in the sector right now. We just saw two new approvals for nuclear power plants in Georgia with the new AP1000 Generation III design. This is after three decades of not approving a reactor here in the U.S. Elsewhere we see that Canada has its own CANDU (Canada deuterium uranium) reactors, and we've seen Canadian Prime Minister Stephen Harper work out a deal with the Chinese Investment Corporation. China is looking to expand its investment presence in natural resources and to diversify its large holdings of U.S. dollars and Treasuries. The Chinese are establishing relationships with uranium producers, and this is going to be very big for Canadian resource companies. We are really excited about the uranium sector at the moment. We're even seeing interest from major entrepreneurs, such as Bill Gates.

TER: I'll ask you about Gates in a bit. But where are uranium equities in their cycle right now?

JH: Right now uranium is presenting a once-in-a-lifetime opportunity. Even though we have seen a rally with some near-term producers up over 200% since those 2011 lows, investors are just now beginning to realize a real turn in uranium market fundamentals, and I think we're really beginning the next cycle, moving higher as demand outpaces supply. Many technical charts show stocks beginning to break above their long-term 200-day moving averages. It may begin to slope upward. 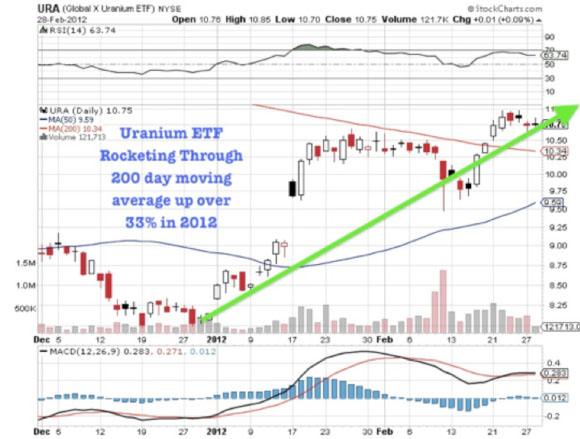 TER: Do you see uranium equities as value plays?

JH: I see that the near-term producers have rallied and have had quite a bounce, and now are not as cheap as they once were, that's for sure. Some of the producers have also moved, such as Uranium One Inc. (UUU:TSX), Cameco Corp. (CCO:TSX; CCJ:NYSE) and Denison Mines Corp. (DML:TSX; DNN:NYSE.A). So far I haven't seen a really explosive move in many of the uranium explorers, and so I think that there's still a lot of upside. Investors have to realize that when the uranium sector begins a new leg up, the moves will be dramatic. We believe we are still early in the game.

TER: Do you have a favorite play?

JH: My main recommendation over the past few months has been Uranerz Energy Corp. (URZ:TSX; URZ:NYSE.A). It hit a low in October; it has rallied since that point with over a 200% move. But I still don't think it's been recognized that it is in construction at its Nichols Ranch Project and should be producing 600-800 thousand pounds of uranium annually. Its grades are substantially higher than its peers and it already has a processing agreement signed with its neighbor, Cameco. I think we're still early stage. It's one of my premier, select equities, and I recommend it be bought on pullbacks. Uranerz is well funded and fully permitted for construction on its Nichols Ranch Project in the Powder River Basin, which is scheduled for production of uranium ore by the end of this year. The 20-, 50- and 200-day moving averages are sloping upwards.

It is important to note that Uranerz' land position is strategically surrounded by hungry majors such as Uranium One and Cameco, which has stated that its production needs are beefing up. Already, Cameco has arranged for Uranerz to use its processing facilities, which heretofore have been underutilized as Cameco is not meeting desired production levels.

Cameco was willing to pay a premium for Hathor, which had nowhere near Uranerz' immediate potential. It may be occurring to Cameco that Uranerz might make a desirable acquisition that will enable the company to expand profitably in this strategic area.

Uranium One, which also neighbors Uranerz, might make a bid for the next U.S. domestic producer. The acquisition possibilities seem endless, with the Chinese looking for acquisitions to purchase with their hoard of depreciating U.S. dollars and Euros. Additionally, the flooding of the Ranger deposit in Australia further intensifies the supply-demand ratio of uranium, which is positive for North American miners such as Uranerz. 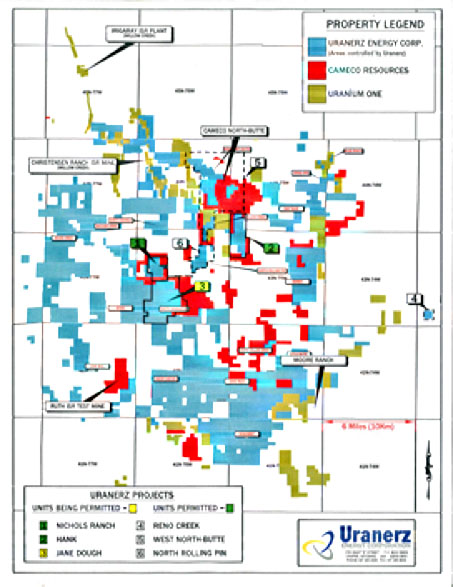 Uranerz also has an agreement to sell uranium to Exelon Corporation (EXC:NYSE), one of the largest nuclear power-producing utilities. It will be shipping resin over to Cameco's processing facility, which is not being filled to capacity, and that's telling me that Uranerz will be a great acquisition target.

TER: Do you think we will see a bidding war between Uranium One and Cameco for Uranerz?

JH: Possibly, and I think that Paladin Energy Ltd. (PDN:TSX; PDN:ASX) is also interested in coming into North America. Paladin just did a big write-down on its African deposit and took a loss. Paladin CEO John Borshoff was also CEO at Uranerz from 1987 to 1991, and I am sure he is aware that it should be coming into production by the end of the year. Right before Fukushima in 2011, Paladin bought the Michelin uranium deposit from Fronteer Gold (acquired by Newmont Mining Corporation (NEM:NYSE)). So, Paladin definitely has an interest in North America.

TER: Jeb, just one more question about Uranerz. Only 18% of shares are being held by institutions. Just based on that capital structure, there's tremendous room for appreciation here, isn't there?

JH: That's why I have targeted Uranerz shares at around $7, which is still over double where it is today. I don't think it is a real stretch when you see the supply-demand constraints over the next 12-18 months. The majors such as Paladin, Rio Tinto, China and surprisingly the government of Iran are having problems dealing with the ever-rising threat of resource nationalism as exemplified by Namibia, which is making noises that it may institute a super tax on miners. Of these aforementioned entities, Rio Tinto and Paladin may find a warmer welcome in the mining-friendly Canadian Athabasca Basin and U.S. Powder River Basin.

TER: You just began following Athabasca Uranium Inc. (UAX:TSX.V; ATURF:OTCQX), with a market cap of under $10 million (M). How do you classify this stock, seeing that it's too small for mutual funds to purchase shares?

JH: I look at Athabasca Uranium as an exploration company in the midst of an upswing. We had not seen a lot of interest in uranium exploration plays, but that changed at the end of 2011. The Rio Tinto deal with Hathor changed the price of real estate in the Athabasca Basin, and this is something that investors are going to begin to realize as the whole area heats up. Uranium is to the Athabasca Basin as oil is to Saudi Arabia. The Basin has by far the best grades in the world, as Saudi does oil. If you're looking for a company with a proven exploration model that is trying to replicate the Hathor, Denison and Cameco model, then Athabasca Uranium is one that you are going to keep a close eye on. It's using leading-edge technology, including airborne surveys and seismic data to precisely designate its drilling targets.

If an investor believes in a uranium bull market and that exploration plays are going to provide significant leverage to the price of uranium, then this is a company you should be looking at because it's on a geological discovery trend. The big boys, such as Cameco, Rio Tinto, Sovereign Asian Funds and possibly BHP Billiton Ltd. (BHP:NYSE; BHPLF:OTCPK) are realizing that future uranium production will come from the Athabasca Basin. This is where deposits have grades tens to hundreds of times greater than conventional projects and are located in the mining-friendly jurisdiction of Saskatchewan, Canada.

To your point, you are right that with a $10M market cap the mutual funds are not going to invest in the company yet, but you have to remember that this young company really acquired all these land assets after Fukushima, when this opportunity presented itself. This is a chance for investors to get in on a ground-floor opportunity where if the company does make a discovery, it has the potential to make very impressive gains. I can't emphasize enough that the Rio-Hathor deal has changed the Athabasca Basin, and certainly the price of real estate in the area. I think investors need to follow companies like Athabasca Uranium, which is on the verge of hitting one of its target areas.

TER: The company currently has samples in analysis. What can we expect to see happen to these shares if these analyses show strikes?

JH: That's a good question. This is an area where there are massive uranium deposits, and if Athabasca Uranium has a showing similar to the size of McArthur Lake, the rewards could be spectacular on the exploration side. There's limited volume on the shares, and investors need to remember that it's a speculative exploratory play. 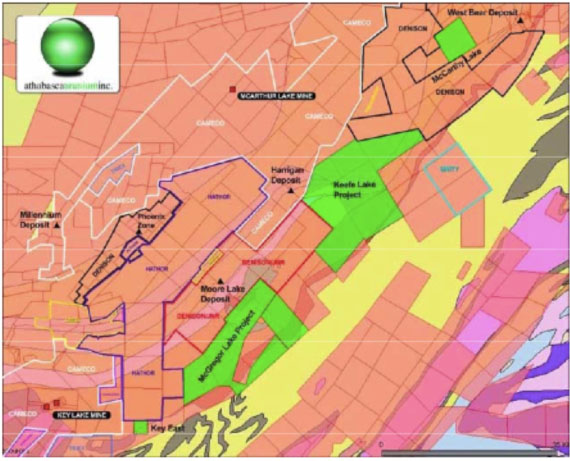 Looking at the map, it's clear that Athabasca Uranium is surrounded by hungry giants such as Cameco, Rio, Denison and AREVA (AREVA:EPA), among others. This company is actively exploring this area and has encountered massive alterations zones for which results are currently pending.

The company is optimistic that of the many holes being currently explored, it would take only several dramatic finds to replicate the Hathor phenomenon, which resulted in the stock rising from a few pennies to dollars.

Athabasca Uranium is modeling itself after the Hathor success. The same aces that generated Hathor are being replicated step by step by this young uranium miner, which is barely more than a year old. It has the "goods" sitting directly in the middle of other successful mining ventures.

The company hired Dr. Zoltan Hajnal, who was the seismic exploration expert for Hathor. Hathor's exploration success was based on the use of seismic data to efficiently pinpoint targets. The success rate of its drilling subsequently rose to approximately 70%. Dr. Hajnal played an integral role in the Roughrider discovery.