Is The Resurrection Of Undervalued Miners in 2012 Beginning?

Once again at the end of 2011 we heard the voices of negation sounding the fear of the bursting of the commodities bubble.  The naysayers come out with their Cassandra calls whenever commodities go into a characteristic and salubrious selloff.  They never really learn to respect the importance of gold (GLD) and silver’s (SLV) role in the long range secular multiyear ongoing rise.

Gold Stock Trades emphasized the importance of avoiding knee jerk reactions when precious metals experience healthy pullbacks.  Today the commodities (DBC) are rising across the board as they return from the premature grave to which the naysayers have assigned them.

One wonders how the short sellers are enjoying this periodic resurrection in vital metals such as gold(GLD), silver(SLV), rare earths (REMX) and uraniums(URA).

Attendant to a new rise in these vital commodities, the economic base should be prepared to receive them.  On January 24th-25th the Federal Open Market Committee will be meeting once again in Washington.  One of the areas on which they will be focusing is the travails of the U.S. Housing Market and new methods to bring down the high unemployment rate.  The Fed is promising a transparent horizon of record low interest rates to provoke the banks to lend money.

It is important that the Eurozone malaise undergo corrective measures in order to restore Europe to health.  Recently Christine Lagarde, Head of the International Monetary Fund, has expressed broad generalities toward the need of fiscal reforms.  It is hoped that Lagarde will not be a laggard in the birth of the “EuroTarp” by whatever stimuli to be applied.

It is important that a coherent plan of attack be formulated rather than the indiscriminate printing of Euros(FXE), which we are currently witnessing.  The Euro is rapidly losing value.  This procedure of currency devaluations is counter-productive unless corrective measures are instituted such as serious spending restraints, permanent tax rate cuts and regulatory relief.  In plain language, the Europeans and the Americans can’t print more dollars (UUP) without building on a base of budgetary restraint.

As of this writing we believe Tasman(TAS) and Ucore(UURAF) are leading the pack.  These stocks possess unique features to which attention must be paid.  Ucore owns a mountain of high grade heavy rare earths right here in the United States.   Tasman dominates the European Continent as the only possessor of a 43-101 resource with heavy rare earths and a high percentage of the vital element dysprosium.    Rare Element Resources (REE) released news that they have just expanded their resource to show potential for heavy rare earths.  The market is reacting favorably as it has nearly doubled in one week. 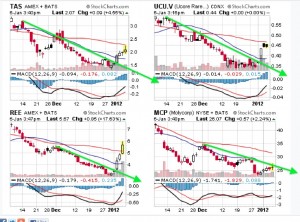 Ucore, Tasman and Rare Element Resources have broken downtrends on record high volume the first week of 2012.  Molycorp (MCP) has underperformed and still needs to break above resistance as it is lagging the sector.

China is playing a dual role not only for their own domestic needs but in establishing a quota system for exports to other nations.  This emphasizes the importance for the West and Japan to establish an independent role in their own destiny.  No matter what happens in the pending appeal with China at the World Trade Organization, The West has learned a valuable lesson in geopolitics as the external industrial nations recognize the importance of rare earth independence.

The uranium sector is enjoying a profitable day as well.  No other area has had to come up from taking a count so many times.  The press has obscured, misrepresented and sensationalized the true story about the role of nuclear energy(NLR) in a modern, industrial world.  The media has relegated uranium mining to the status of selling newspapers and  TV commercials.  The truth be damned.  Imagine when the true story is finally told.  Not once have the talking heads mentioned that reactors that are being built are portable, economical and safe.  The truth can not be suppressed much longer.

Uranerz (URZ) is within 12-18 months of producing yellowcake at a profit even in the less than ebullient marketplace.  Remember that Hathor (HAT:TSX) a mine far removed from production has been bought by Rio Tinto (RIO) who outbid rival Cameco (CCJ).  This emphasizes the undervaluation of our nuclear miners especially Uranerz, which is the next U.S. producer of uranium.  It must not be forgotten that over 90% of uranium in the U.S. is imported.

In conclusion, our sectors and recommendations are once again emerging from their long bases.  Reiterating the long ascendance of these sectors, patience is paramount albeit painful.  We have been advising our readers that this correction in commodities would be far from terminal and represents a classic buying opportunity.

Stay tuned to my up to the minute premium daily bulletin free for one month by clicking here.