Beware Of Debt Bubble, Hedge With Gold and Silver Miners

We have alerted our subscribers on many occasions during the past two years that global credit downgrades of sovereign nations were inevitable. It does not take a prophet to have foreseen the turbulence in the global marketplace that we have witnessed since the expiration of QE2. Standard and Poor’s cut the rating one level from AAA to AA+. This action sent shockwaves reverberating throughout the financial world as irrational investors sought U.S. treasuries for liquidity. These days of reckoning will be with us for a long time as investors flee from deteriorating paper after an artificially induced debt bubble to undervalued real wealth in the earth assets such as the gold  and silver miners.

Unfortunately, the American middle class is being rapidly disenfranchised. The economy has been pillaged by appointed officials who have received lavish bonuses from TARP monies instead of prison sentences. The very same miscreants who raided the hen house were appointed to reconstruct the chicken coop. The hard working Americans who pay the taxes and go to work every day have scant recourse but to accumulate miners and hopefully elect ethical representatives who will put a halt to ruinous printing of fiat money. It's about time that the American investor awakens to this fiscal insanity. We believe there is a great opportunity in this growing divergence to pick up overlooked and undervalued mining equities and bullion after the recent selloff.

The G7 nations published a statement that they will take all needed measures to support stability in the global markets. Merkel and Sarkozy pulled out the big guns saying they would prop up shaky European Banks. Do not be surprised if Bernanke comes up with a similar quantitative easing approach to pay down American debts and avoid another crash. When Bernanke did this with QE2, in August of 2010, the markets took off and many of our selections in natural resources soared with doubles and triples.

Subscribers must realize that what is going on is a version of pump priming of whatever means necessary. Our firm has continually stated that we are being programmed with weak economic data and fear mongering by the media for additional stimuli to revive the economy.

Some readers are concerned that small miners may not be able to raise capital in these tight credit markets. Although there will be short term pullbacks and increased volatility like we have witnessed, the trend for Central Banks to stimulate the economy through whatever guises necessary should continue. Wealth in the earth assets and gold (GLD) and silver bullion (AGQ) will move higher over the long term. These healthy corrections are characteristic of mining stocks and the precious metal arena. 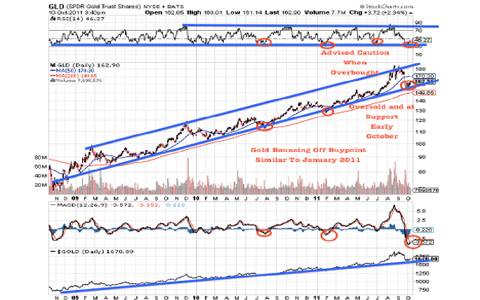 In conclusion, the recent upward reversal in the markets is an opportunity for subscribers to stay the course. It is only a matter of time before the upward move in bullion is reflected by the miners as they represent the source of bullion itself. Do not get caught up in the current panic and use this pullback as an opportunity to add or initiate positions in precious metals and natural resources mining equities.

Click Here To Receive My Premium Bulletin For Free!