Is Gold and Silver Money?

Readers continue to express an abiding interest in silver, also known as the “poor man’s gold.” Prominent among the questions they raise: Quo vadis silver?

Recently the noble white metal experienced a rapid run-up to the halcyon heights of $50, only to retreat precipitously to the low $30s. This on-again, off-again action was due to a technical response to silver’s inherent volatility as both an industrial and a safe haven metal.

In order to quell such ebullient action, the Comex lowered the boom by a series of increasing margin requirements similar to what is occurring now in gold futures. I've written that such moves were in the cards with silver in late April, and gold more recently. Too much hot, speculative money was entering this market in late April (and early August in gold). Moreover, the big banks and hedge funds grew uncomfortable with their growing short interest positions. The actions of the Comex arrived just in time to save the day for the big fellows.

Furthermore, the $50 area represents formidable overhead resistance dating back to January 1980 when the Hunt Brothers drove prices from $11 to $50 an ounce. It did not come as a surprise when we saw the possibility that this overhead resistance would be subject to a Newtonian “equal and opposite reaction” to the mean that had been established in the low $30 area.

Where do we go from here?

Short and Medium Term: Recently silver has broken its 10-week base, and in the short term may have gotten ahead of itself on the breakout, as the 50-day moving average flattens and commences an upward slope. 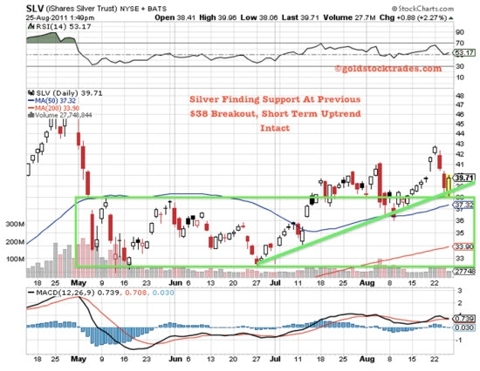 Look for a rendezvous with the 20- or 50-day moving average or its short-term uptrend for a secondary buy point.

Long Term: My firm believes that silver will recapture its $50 heights sooner rather than later. The establishment of a base in the low $30 area has been a healthy and a necessary one for the technical resumption of the upward, long-term trend.

In confirmation, silver has made a triple top breakout on the point and figure chart. This formation is one of the strongest technical indicators that auger a pending upward rise.

Readers have asked whether silver is rising too fast in comparison to gold. My response is that we have only to look at the gold-silver equation. What had been historically a dominating ratio of gold to silver is readjusting to reduce the preponderance of gold in this formula. It might appear that silver is rising too fast, however it is playing catch-up to what has been a narrowing of the gold-to-silver proportion. My firm believes that, since the historic breakout in silver in 2010, the gold-to-silver metric would significantly decrease.

Silver operates from a dual base, acting as a safe haven for the rising middle class as well as its vital use in industry. Demand is soaring, while supply from existing mines is diminishing. This supports the bullish thesis. Whether the US dollar can maintain its safe haven status is questionable. Add to this the tenuous position of the Eurozone and the future of the euro. The supply of silver is extremely tight. There are few pure silver plays as it is mostly produced as a byproduct. For these reasons demand exceeds existing supply. Investors unable to do specific stock research should take a look at the Global X Silver Miners ETF (SIL).

Is silver the new gold? Is it going to be more of a safe haven as margin requirement increases hit gold? Interestingly, the biblical terms for money and silver are synonymous. My firm believes that the appellation “poor man’s gold” is not derogatory. Instead, it refers to universality and feasibility as a medium of easy exchange in the banking and public sectors.

When Dr. Paul asked Dr. Bernanke, “Is gold money?,” the answer might have been, “Yes, but silver is more so.” By federal law, silver is money, exchangeable more easily than gold for goods and services. Silver represents a rising area of importance in our everyday lives. It is ever present and growing in the age of the plagues of uncertainty, instability, turbulence, revolutions and fiat money. We expect silver to hit new highs, along with the miners, in 2011. Stay tuned to my daily bulletin for specific stock research and market timing.