Dollar Vs. Gold Ratio Putting Pressure On The Fed

In Advance Decline Suggests Stimulus Hasn't Worked I wrote about how the Federal Reserve and Washington DC will do anything possible to save the markets from a bear market before the November election. Unemployment is high, defaults on homes and credit cards are rising, and record amounts of taxpayers’ money have gone to bail out failed banks. The last thing Washington wanted was another bear market before a November election. An emergency job bill was passed and the Fed started pumping money into the system. Now we're beginning to see the outcome of the Fed’s actions as the world looks at a deteriorating dollar and the tension that surfaces with volatile exchange rates. Recent job bills and quantitative easing may help tomorrow’s job report, which could put some hawkish pressure on the Fed to change its stance.

I believe over the next few weeks volatility could increase as a major shift in Washington may occur. Although the equity markets are up, the dollar and the economy haven't shown improvement. The Tea Party movement and politicians who push tax cuts and less government spending are gaining recognition. I wouldn't be surprised if there's a shift in power, which may be bullish for the dollar, or another intervention from overseas to continue purchasing the dollar. Tomorrow’s job report could provide relief to the oversold dollar as additional government jobs were created through recent legislation and massive cash infusion from the Fed. The dollar could have a dead cat bounce. 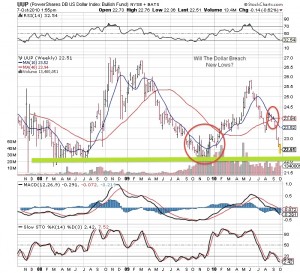 Japan and China are facing pressure on growth from a devalued dollar. A cheap dollar is hard on businesses exporting to the United States. Japan is especially in a precarious situation where it has had to intervene to prop up the dollar in order to support growth. It was short-lived as the yen dropped only to rally to new highs a few days later. This may lead to further easing by the Japanese and purchases of the dollar. Japan hasn't needed to do this since 2004. 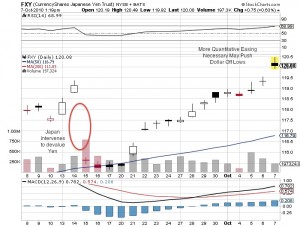 The Fed needed to ease this past summer as equity markets were on the brink of double dipping. Central banks had no problem to devalue as well since the European Debt Crisis led a rush to the US Dollar and at that time the euro was collapsing and the dollar was high. The threat of deflation after the May flash crash was very high and markets were on the brink of heading into new lows before an election. The Fed injected a lot of money into the system causing a dollar collapse, a rise in US equities, and a major breakout in precious metals.

Bullish sentiment in gold is reaching very high levels and if this deterioration of the dollar continues we could see more sovereign debt and liquidity issues. This could be bullish for the dollar. The weakness in the dollar will also put hawkish pressures on the Fed. Many are expecting more quantitative easing but the market may have a surprise if the Fed changes its language to support the dollar and curb the speculation into gold and silver. The jobs report tomorrow will prove to be a key figure on which the Fed will base its decision. Just remember, in every bull market there are two steps forward followed by a step back. We may be entering that step back in precious metals.